Our fearless captain has picked the sixth and final crew member for the Pac Cup.  The guy wearing the green/yellow shirt over on the right backed out since his son's baseball team is gunning for the little league world series title.  Or maybe he realized that 2+ weeks on a 44' boat with five other guys isn't all it's cracked up to be. 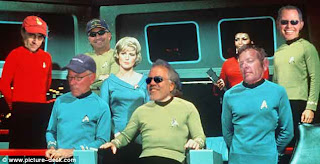 So Paul went through an exhaustive crew replacement search that was coordinated much in the same way that American Idol auditions are run.  A few crew members plus an insane lady that we grabbed from Cafe Roma near the marina sit behind a table and make the prospective crew members sing sea shanties while we amuse ourselves with blistering personal attacks and quips.

Only one sailor emerged from this process unscathed and has become Valis' sixth crew member.  He is a well known blogger, online personality and appears to be a new media expert.  I won't out him any more than that quite yet but look for some mid-ocean synchronized blogging.  Maybe.

I got the job?

It's Paul Cayard, isn't it?

So glad you patched things up with him!

Noooooooooo. Cayard isn't a well known blogger like me. And I never wear a pope hat. At least not on a boat.

Likes mermaids? I'm gonna say obsessed. I'm a little worried spending 2 weeks at sea with a guy like that. :)

You chose the mermaid dude over me? I'm totally humiliated.

PS. Seriously though, congrats to David and I hope you all have a great time.

This is such a momentous event that I will leave the bat cave and make the trek to the East Bay to see you guys off.....or I could paddle from East Beach and take some pics as you sail by. I need details!

Edward, you flatter yourself. I know you have been swimming a lot, and now I wish I had started a fitness program myself months ago, but you are no mermaid, you're not even female. The duty of Ship's Mermaid Wrangler is to manage engagements with mermaids encountered en route, not harass fellow crew members.