Not to put too much pressure on Tirso but I've always thought of him as "my friend who would sail with me" and gave him the excuse that he lived in Los Angeles. Otherwise, he'd be up for a Saturday night "let's go sailing tomorrow despite the dreary wet weather" call. Then it turned out that he gets sea-sick just leaving the dock so I thought I'd be out of luck.

Sunday dawned exactly as NOAA promised: cold wet dreary and dismal. (Editor's note: all forecasts should be written in colorful Elizabethian Language: 'tis to be a day of scant sunlight with ever the dreary skies dark countenance pouring forth with drenching rain such that a man's spirits can only be lifted by the touch of the tiller and the crinkling sound of foul weather trousers.) So, yeah, it was rainy and coldy and darky and dreary but that's what we wanted on the Winter Sailstice. A day to sail on a day when you shouldn't sail.

We arrived at the dock in a slight yet constant rain, hustled onto the boat to put on our foulies; luckily Tirso listened to me that the foulie pants were a good idea. Step one, dress the part; step two, get the boat ready. 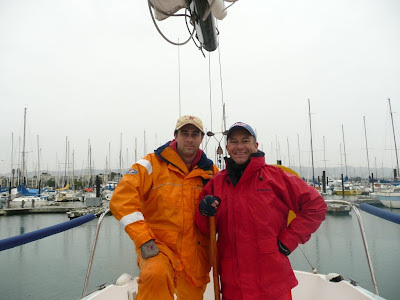 We do look the part don't we? Other than that I look pretty damned bulky in foulies; anyone think I look fat in those pants? Oh yeah, the sailing. We took off from the dock without incident and headed out to Sea. Remember, Tirso's last encounter with sailing was filled with green thoughts and concern for his life so this was technically his first sail. I explained what everything was, wishing for the millionth time that I didn't have three lines with red and white in them (they seem so different to me but somehow the distinction is lost on every one else).

We got out of the marina, raised our sails and headed for the only other boat we could see, figuring incorrectly that it was David from NeverSeaLand. It wasn't but gave us a great destination since we didn't really have one. By the time we got to the end of the Berkeley Pier, the wind was getting southish (a very bad sign in stormy times) so we turned around, executed a few gybes to get Tirso used to them.

Lonnie always talks about wearing appropriate clothes for the weather and he is dead-on right. We were perfectly toasty despite the high 30s temperatures and rain. Except our fingers...they were like little frozen hand-sticks because of the freakin' fingerless sailing gloves. The tip of one finger almost cracked off it was so cold. The first accidental mention of hot chocolate and we were on a dead run back to the marina. 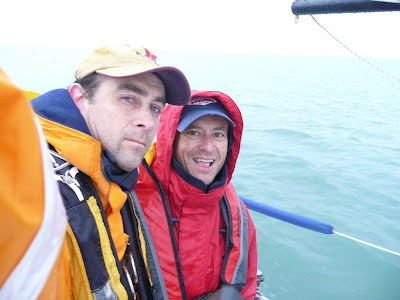 So despite cold weather, a crew member who used to get seasick, and rain the entire 2 hours we were sailing, it was an incredible day. I will sail on the coldest darkest shortest day of the year every year. Long live the Winter Sailstice.

What I didn’t mention in my post ‘Wasting Time South of the Border’ was that after Anne got in her car to head back to the far reaches of the North, I indulged myself and went searching for EVK4’s boat. That had been the plan. Had we gone sailing in the rain, my secret goal was to find this famous Blogger, or at least his boat. Imagine my disappointment when I read your latest post.

Imagine my surprise to find out that there are actually three Newport 28’s on ‘A’ dock!

I think that middle one might be a Newport 27; it's new just showing up in the last week or so.

Mine is the first one you come to that has the blue dinghy next to it.

Definitely search Lady Bug out again next time you're at OCSC...I often come to the dock and find busloads of tourists getting pictures next to the boat. It can be a hassle signing all of the autographs but anything for my fans.

The first sail I ever did on my current boat was on a day just like that, and it was actually kinda nice. The bay can be cool on a quiet, gray, rainy, winter day.

But you may be right about those foulies - the look is tending more towards Gloucester fisherman than dashing ocean racer. Maybe that's not your color. How about something in navy, with maybe some slimming vertical stripes?

Remember the mantra - what would Paul Cayard do?

I don't think Zorro would ever let his crew resemble Gloucester fishermen.