Day 6: The Most Perfectest Day Ever

I awoke for my first morning watch, looked up through the hatch over the "Spoon Palace" and saw a blue and white sail up there. We were flying the spinnaker! I went up above to hang out with the crew for a while and you could feel the tropics starting. The crew was in shorts and we were playing some Buffett, this was so tropical. 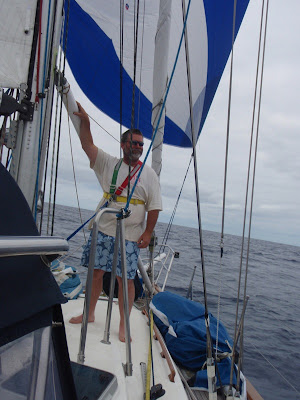 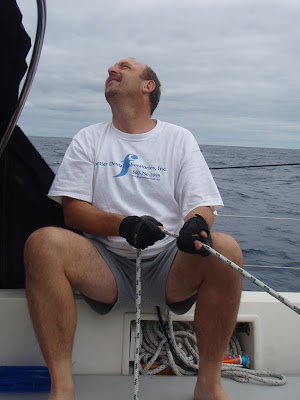 It was still gray but hardly monotonous; we were flying the chute. I wanted some time to trim so I relieved Charlie just to get a feel for it...I'm the first to admit I'm not actually good at it but that was one of the points of this trip. Darren was driving and we got into a good communications pattern pretty quickly; the only problem is my spindly-ass arms couldn't take this for more than the 90 minutes I did it. 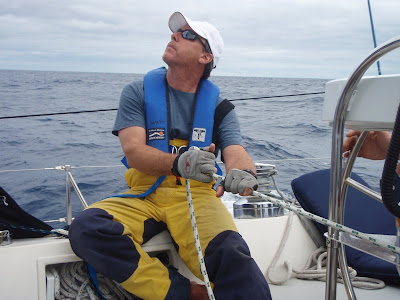 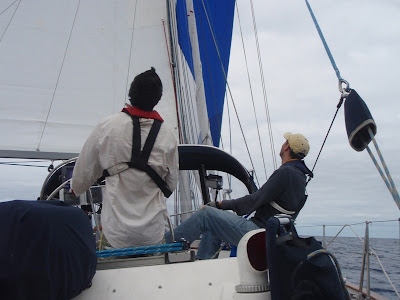 After some time, that problem became apparent and coupled with our desire to sail deeper than the asymmetric could take us, we pulled it down and raised the butterflies. Now we were sailing...these little blue sails are amazing; they're 118% of the J each, made of 1.5 oz nylon. We sailed something like 12-1300 nautical miles with these babies and they held up amazingly. 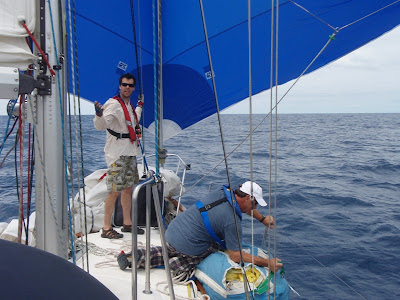 I got my second cut of the trip: a little one on my finger to go with the big one on my knee. Darren had bruised both shoulders (the bad one on his right he doesn't remember happening), Lissa had a busted up ankle, Charlie had a small gash on his arm, and Garrett said he had a lot...I wouldn't look because he was reclining in a porn-star pose.

About 14:00 we started to actually see a high-pressure zone forming. There was this big blue cloudless area in the exact shape of an isobar line. You could see the entire circle of blue -- the first non-gray sky of the trip so far and we're on day 6 here. This thing was like something you'd see on the weather channel, the perfect representation of the Pacific High. 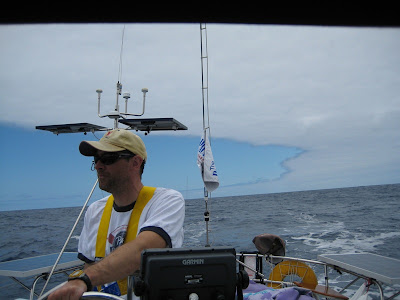 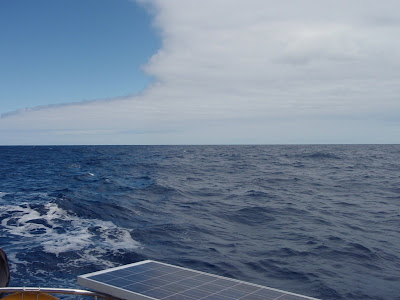 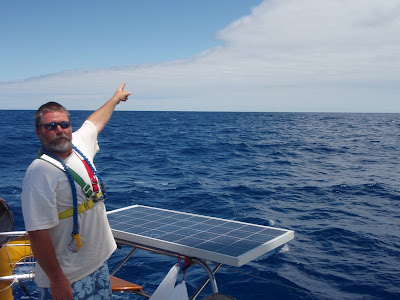 As we approached it (or rather it expanded to engulf us), I couldn't help but think that "this was it", the Pacific High was going to win, wind would shut off and we'd be becalmed in the Pacific Trash Gyre until we ran out of food and started to get all Donner Party.

And then we were in it. At one point, as we were exactly on the line, there were gray skies and gray water on one the port side and blue skies and blue water on starboard. It was like the Mason Dixon line. Once we were in it, life changed. The waters were cobalt blue, but not the cobalt blue that comes out of a paint tube but picture a clear cobalt blue like it was half paint half linseed oil. It was like if you took a color and made it three dimensional. This color is impossible to describe but I'm pretty sure it's why people sail in the ocean.

I still had my fear of the wind shutting down and having to decide who was going to get eaten (I'm too skinny, I think I was safe). But once we were in it, we still had wind, we weren't doomed. The boat moved at 5.5 knots with the butterflies with only 7 knots true wind. Myth Busted, we tamed our arch-enemy, Pacific High!

Now that we have the sun, shoes and socks came off. Good-bye tan lines on my feet, I did this for Heidi!

This is what they sell in the brochures: blue skies, wind pushing us to Hawaii, BEAUTIFUL deep blue (dare I say cobalt again) water, and an autopilot shooting us DDW at 6 knots. I wrote that when my watch had been over for 90 minutes and I was still at the helm. I said in my journal that I'd do this all day and, in fact, I did. I must have steered 12-14 hours that day and enjoyed every minute of it. 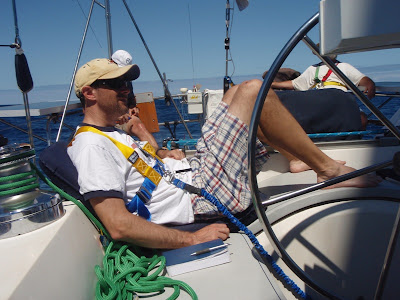 It was like a daylong party on deck, between the extra bedsheet sail area, the fishing hi-jinx, the smiles and jokes. This was how sailing is supposed to be. 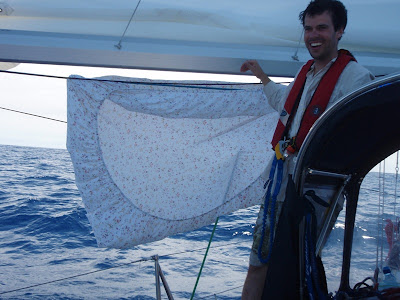 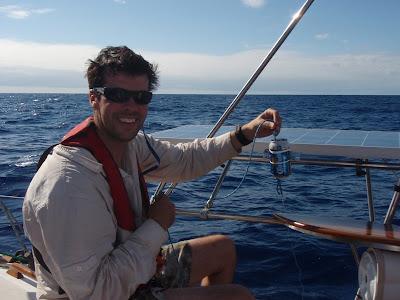 After a beautiful sunset, the night was topped of with stars, bountiful stars. The moon didn't rise until about 2 hours into my watch so I had plenty of time to see stars. They were brilliant and we had a mystery planet that nobody ever identified. At one point every planet save Pluto got a guess over the next week. 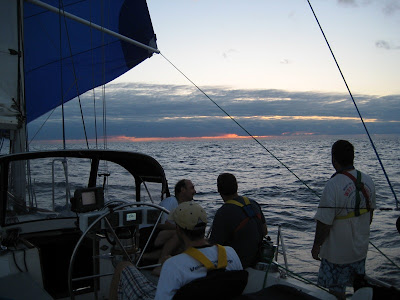 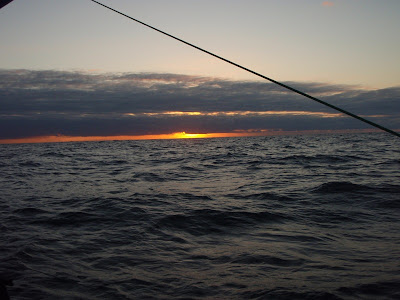 This was the turning point of the trip, from simple yacht race to absolutely sublime experience. I never wanted that day to end and don't know if I'll ever recapture that feeling on a sailboat again.

It never gets as good as the first time...

the fun is trying

Thanks for these day-by-day delayed accounts. I'm really enjoying the story. I look forward to catching up on the next day each evening when I get home from work! great photos, too.

I remember an encounter with the Milky Way that I had after living in a big city for five years -- I had returned to the desert, and Pat, who had never been someplace really dark before, couldn't believe it. He was positive that this great, bright band of light across the sky was some sort of cloud.

In the desert, in the mountains, and out at sea -- those are the only places any more that one can actually see the night sky in all of its glory. Everywhere else, the light of human activity blots out the grandeur of the stars.

How fantastic that our generation will be able to tell our grandchildren that we lived in a solar system where Pluto was still a planet! They will never know what they missed.