When I woke up on Saturday morning, I thought I was going to the Technology Museum for a Robot exhibit. And I was excited about this. Don't get me wrong, I knew the forecast for the day....10-15 knots in the morning building to 20 with gusts of 25. But, damn, robots are cool and my 2.5 year old loves them.

I was forcing Noah to eat breakfast when I overheard the conversation (more accurately, half of it). Heidi was saying we should carpool, but then not everybody would fit in the car. I'm nothing if not an idea man so I blurted out, "Brian, Camille and I can go sailing...problem solved!" {Pause for dramatic effect}. It worked except Camille still wanted to go see the robots. Who can blame her? As I said, robots are cool.

Brian had only sailed once before but he was very into the idea. We got to the boat and he asked what he could do. I usually have a hard time delegating tasks to first-timers since it's really hard to explain how I like things folded, sorted, bowlined, etc. But Brian was *really* into it.

He was coming into sailing with a completely different perspective. He's an engineer and he just loved the process of everything that had to be done. No, it wasn't the process, it was the ritual of it. Taking off a sailcover, clipping on halyards, pulling on lines, coiling them. He was just into it.

He didn't get excited about the main going up and the engine being turned off. But something about the jib going up and seeing how the sails worked together had him doing backflips. I called him an engineer earlier but he's more artist than engineer (he was in a pretty successful band back in the 90s). I mention this because the next thing he said completely inspired me, he was looking up at the main and was just in awe of the shape of it. He wasn't talking about my trimming skills because I know I needed some vang and traveller on...he was simply talking about the beauty of the shape.

Don't get me wrong, I commune with nature when I sail. I appreciate the wind, the sound of the waves, the open air, the lack of $4/gallon gas burning. But I've never appreciated my boat as a work of art. Sure enough, the sail had this beautiful curve, almost Georgia O'Keefe-ish in its shape. I didn't take a picture of the sail, but I did take a picture of Brian steering. 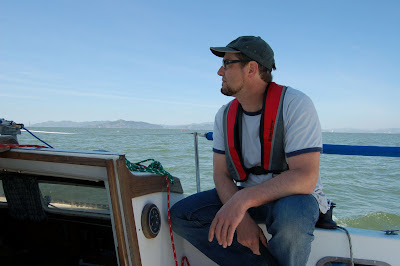 It's pretty amazing to go out with someone who doesn't sail and find myself picking up more appreciation for something that I already love so much. So not only did I get the bonus of getting to sail on Saturday, but I got the super double bonus of learning more about sailing.

Lonnie, great quote. I might be reading some Villiers.

derek said...
This comment has been removed by the author.
7:05 AM

"I feel it now...there's a power in me to grasp and give shape to my world. I know that nothing has ever been real without my beholding it."-- Rilke

whoops...signed in with the wrong account there Mr. Rilke?

"An identity is questioned only when it is menaced"

"So long as a fool persists,
he grows wiser;
So, round the world he goes,
but return he will,
So humbled and beaten back into servility."

So what was this "pretty successful band back in the 90s"??

They were an indie band (on Matador). My wife actually went to see them when she was in college (but then again she was a hipster?!?). Brian's got the best stories from this period but this is a sailing blog so I'll let him write his own.