It all started with a dockside conversation. And it escalated from there. Like the Hatfields and McCoys, the Jets and Sharks, and Mods v. Rockers before them, the Singlehanded Transpackers and Pac Cuppers engaged in a furious battle over seemingly insignificant slights. But it mattered. At stake was bragging rights on the Pacific Ocean (or at least the first third of it).

But sailors are different. We can only hold that much anger against things like Port Tackers, crab pots, and long lines at the Rum Tent. So when I arrived at my boat on Saturday and saw a peace offering I wasn't surprised. There in my cockpit was a pink plastic thing. It was an official "Pack" Cup to celebrate a voyage to Hawaii. But it was more than that, this "Pack" Cup has some special meaning. This was the official Tiki cup that Chris received when he finished the Singlehanded Trans-Pac in 2006. 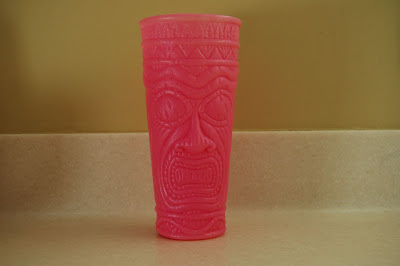 I'm going to be drinking from an official trans-oceanic plastic tiki cup. Talk about good juju. With the speed and alacrity with which we solved this feud, I'm pretty sure our next step is to get involved in the Mid-East peace process.

"You shall love peace as a means to new wars — and the short peace more than the long one." - Friedrich Nietzsche

Peace offering? Avast, heave to and strike yer colors! The essence of the "cup" can not be concretized until one pineapple, skewered by the working end of a cocktail umbrella, is floating on top a certain elixir. Then, and only then, will you know how you are and how you've arrived in Hawaii.