Solo Slooping without a Sloop

My first stream went without a hitch! Except my stream crashed after 40 minutes. And a mean ass skeleton sank my boat before I could even attack him back!

I had a message in a bottle quest that said to go to Shipwreck Bay and solve a puzzle to dig up my chest. Of course I've been to this island before and "knew" that if you got in close enough the skeleton cannon wouldn't be able to target you, giving me time to run up and blunderbuss him to death. So, I sail in full steam, right up to the beach, taking cannon fire, drop the anchor and go running up the hill, sword at the ready!

By the time I get to him, my boat had sunk! If I'd had crew, that would have been easy to keep repairing while getting cannon-pummeled. But, alas, the life of the solo slooper. Never fear, I'm a mother-effing Pirate, I had loot to secure. So I solved the puzzle, killed all the skeletons guarding the chest (a marauder's chest FYI), and sat down to contemplate life. 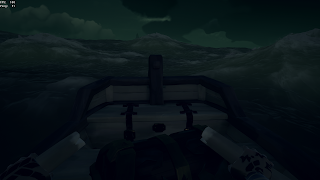 I chose 3. I put the d@mned chest in my rowboat and headed to the outpost. I, of course, didn't have the situational map awareness that I should have had, so I just stared heading toward the island that I thought was the outpost. One cool part about the game is that it does this foreboding ominous warning of the island's name as you approach.....dum dum dum....The Crooked Masts. Umm, crap, that's not where I was going! So I cheated, looked at another monitor, saw where my island was and turned the boat 90 degrees! 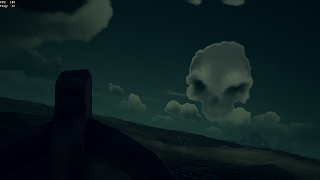 Luckily, I had a perfect landmark to shoot for.....the skull fort was right behind my outpost! So I kept rowing toward the giant skull, landed on the island and anti-climatically turned in my loot for something like 300 gold.

I started a new quest, where I was supposed to go dig up a chest on an island full of skeletons. And, as I was sailing there, my game crashed because I haven't really figured out the streaming software. My fault but I got 40 minutes of my first stream in and have exactly one viewer to my credit. Of course, it was me on another computer but still, I had a viewer!

Tune in Wednesday and Sunday nights at 6PM Pacific for more adventures of the SS Whazzzzuuuuppppp on Twitch!

I am blogging at Aerobian.com these days.

If I can't sail I might as well pirate! My son's stream is a ton better than mine but I think it's because he's a better fighter than me!