Streaming Sea of Thieves (and writing about it)

I have to start this post with a complaint...you raise the sails when you want to sail, drop them when you want to stop. Not in this game with its ridiculous square rigging and crap. It's teaching landlubbers the wrong terminology and confusing the h3ll out of me! My son, NoahWK, will yell out raise the front sail when he really means drop the jib. But we work through it. Until we decide to sail DIRECTLY INTO THE WIND!

But I deal with this game because it is insanely fun AND because we get to be pirates. We dig up treasure, we cannonball skeletons, we carry pistols and swords...just like pirates of old.

And it gives Noah and I a chance to sail together, something not done since 2007! So we have a slightly different dynamic than we did back then. I still sail the boat and worry about safety but he's now my muscle! When I'm solo slooping, I slink around the seas trying to avoid all the bad guys, scared to death of these guys and their cannons and PvP skills. When I have Noah with me, we go after those fools.

He's like Keyser Soze, laying waste to every pirate, sinking their ship and leaving no survivors! One time, Noah, his friend Patrick and I were all attacking a skull fort. A sloop and a brig came in and attacked us, killing Patrick and me while sinking our ship. Noah was left there by himself while we hurried back to the fort to "save" him. As we were getting our new ship going, he calmly said, "no hurry, I killed both teams and sunk their ships, I'll get the loot organized." Glad to have him on my side. 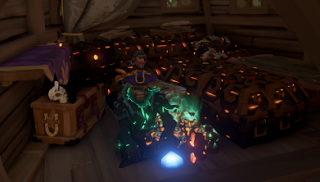 The goal is loot. I don't spend mine, Noah does. He decks out his ship, his clothes and his quests. All I did was get a tattoo, an eye-patch and some shiny boots because I was worried about stubbing my toe on deck with sandals on. It's that kind of game.

We plan to stream the game every Wednesday and Sunday night at 6PM Pacific. You can watch dual points of view by seeing both of our streams at the same time. And see a unique Son of a Son of a Sailor Man video game extravaganza!