How we survived the Pacific Cup

Everyone knows there are a lot of dangers out on the open ocean: whales, pirates, container ships, airborne aquatic simians, rogue waves and bad helmsmen who crash sailboats in less than 30 knots of wind are the most common. But there are more and VALIS, in her duties as communications boat, was subjected to possibly the worst of them all. IQ leak.

See, the modern sailboat is awash in electronics and their associated wave outputs. Single side band, AIS, iPods, VHF, 406 MHz EPIRBs, that annoying squeal from the freezer compressor, tricolor nav lights and Hawaiian music. All of these contribute to rapid gray matter brain deterioration according to a study I might have read in The New England Journal of Medicine.

And, we had the frickin' beehive of electronics going all the time. Well, except for the autopilot, that would have wasted electrons! So, our fearless captain, devised a sort of brain matter faraday cage that kept him safe during those long hours taking positions and keeping boats entertained on the SSB. 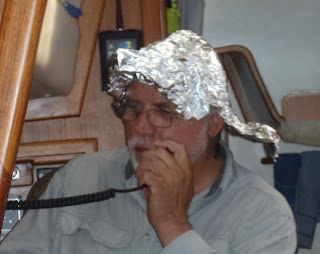 Don't know for sure if it worked, I'll give him a basic IQ test next time I see him to find out if he's still a supergenius. With a hat like that, he sure looks like it.

Those hats are very practical.

They're waterproof, one-size-fits-all, lightweight, and, as you've discovered, an effective shield against UV, infrared, and most electromagnetic radiation. On the right head, they're pretty darned stylish, too.

There's really little that one could want from life beyond an aluminum** hat.


**The British call these aluminium hats, although I don't know why.

Blogs need "like" buttons. I have absolutely nothing intelligent to say about this but it definitely made me laugh.

The metal was named by the English chemist Sir Humphry Davy. He derived the name from the mineral called alumina.

Sir Humphry made a bit of a mess of naming this new element, at first spelling it alumium then changing it to aluminum, and finally settling on aluminium in 1812. His classically educated scientific colleagues preferred aluminium right from the start, because it had more of a classical ring, and chimed harmoniously with many other elements whose names ended in –ium, like potassium, sodium, and magnesium, all of which had been named by Davy.

The spelling in –um continued in occasional use in Britain for a while, though that in –ium soon predominated.

In the USA, the position was more complicated. Noah Webster’s Dictionary of 1828 has only aluminum, though the standard spelling among US chemists throughout most of the nineteenth century was aluminium; it was the preferred version in The Century Dictionary of 1889 and is the only spelling given in the Webster Unabridged Dictionary of 1913.

Searches in an archive of American newspapers show a most interesting shift. Up to the 1890s, both spellings appear in rough parity, though with the –ium version slightly the more common, but after about 1895 that reverses quite substantially, with the decade starting in 1900 having the –um spelling about twice as common as the alternative; in the following decade the –ium spelling crashes to a few hundred compared to half a million examples of –um.

It’s clear that the shift in the USA from –ium to –um took place progressively over a period starting in about 1895, when the metal began to be widely available and the word started to be needed in popular writing. It is easy to imagine journalists turning for confirmation to Webster’s Dictionary, still the most influential work at that time, and adopting its spelling.

The official change in the US to the –um spelling happened quite late: the American Chemical Society only adopted it in 1925, though this was clearly in response to the popular shift that had already taken place. The International Union of Pure and Applied Chemistry (IUPAC) officially standardised on aluminium in 1990, though this has done nothing, of course, to change the way people in the US spell it for day to day purposes.

Actually, the hat is made of mu-metal, and it is specifically designed in a "stealth" shape, so I can't be tracked by the orbiting aliens. Note the extra coverage of the cerebellum and medulla -- these area are particularly vulnerable to the mind-control beams and the victim is generally unaware of the damage (these being the primitive or "reptilian" areas of the brain).

Plus, it looks really cool!

The alloy mu-metal was first created by the British scientist Henry Cavendish and is named for the sound that English cows make.