Which way is up? The Crash explained. Sort of. 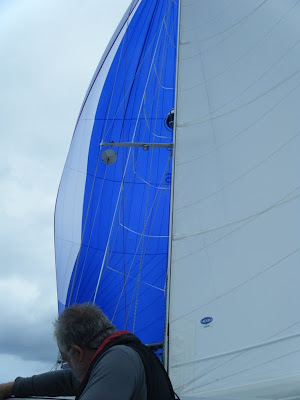 Finally, after much hemming and hawing, we were flying the spinnaker on day 10 or 11 or something. I was third on the wheel and nervous as h3ll. Most regular readers here know that I haven't driven much under spinnaker and, truth be told, still haven't much.

I took the wheel with about 20 knots of wind and 6-8 foot seas, not too bad. For about 20 minutes I think I did alright, keeping the boat moving, hitting 10.5 knots (at that point, the record) and sailing on course. Then everyone started joking about the squall behind us, err, the squall behind *me*. Not funny guys, but I turned around, grimaced, did some advanced mathematics to determine that I'd still be on the wheel when it hit, and quietly swore under my breath.

Next thing you know, it hits us, the wind picks up and I realized quickly I was in over my head. I asked to have the pole forward and sheets eased right before the wind picked up and to this day don't know if that happened. If I'd had the sense to shut up, it would have just been a roundup without anyone making fun of me, but I had the stupid ass idea to say, "I can't handle this at 27 knots" as my roundup started. Then the boat was this way: 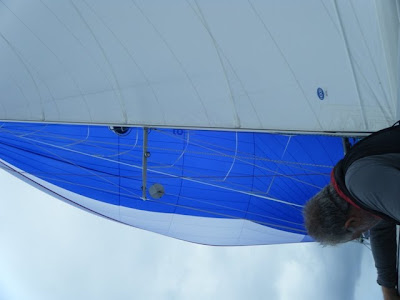 And we were bathing comfortably in 70+ degree saltwater. I had the wheel hard over, the sheets and the guy were eased and VALIS righted herself. I remember distinctly getting back on course and noticing that the kite wouldn't fill. I kept telling the sheet trimmer this but it's all blurry and I don't know what was being done about it. I might have been the only person who could see that the kite had something wrapped around it halfway up so it had an hourglass shape going. (note: Rich is convinced I was still steering starboard, he may be right).

See, this is when the real problem happened, I couldn't steer the boat (either because I'm an idiot or the kite was out of whack) and suddenly the main backwinded and, oh sh!t, we were rounding down, a much more serious turn of events. Whoosh, we were over on our OTHER SIDE, like this: 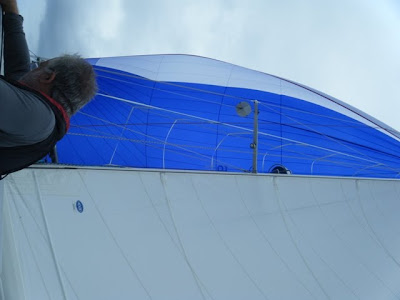 And, then, the worst thing almost happened. When the Oh Eight Pac Cup was on, VALIS had a round-down and lost her helm-cushion. I looked over the side of the boat and saw the cushion starting to float away and realized I only had two jobs, keep the wheel hard over and grab that derned cushion. I did both admirably.

As I pulled the cushion back on the boat, Paul eased the preventer, the boat gybed, and I hove to. Taking a deep breath, I noticed that the spinnaker snuffer was broken. Then Tirso said, "dude, don't worry about that, you broke the pole". Erk. That's a lot of money and a lot of sharp little bits of carbon all over the place.

Paul, Tirso, John and Rich did a herculean job of getting the spinnaker back in the boat with no rips. They got the pole sorted out and stowed. We all made sure nothing more was broken as I kept the boat hove to (later realizing, I could have just locked the wheel and helped out). Finally, Rich gave the OK to gybe and start sailing under main alone...I argued for a bit about the giant piece of scrap metal stuck on the shroud that would puncture the main if we gybed. We finally pulled out the slide rule, Rich computed an algorithm or two, and we determined the main was safe. I gybed and we started sailing again.

A bit more sorting and we poled out the genoa with the other carbon pole (bless Paul and his thorough boat prep). And were back to the races.

Paul screenprinted all of the data from the previous eight hours to show our 2 hour break in the middle of the ocean while I flopped the boat over to inspect the keel...on each side. And then he started making fun of me...pointing at the wind. "Oh not, it's 28 knots! Be careful out there!" "Eeek, the wind!" And so on and so on.

Me being the modest type never pointed out to him that "hey dude I saved your freaking seat cushion so you wouldn't need the monkey-butt powder." I'm just not appreciated. 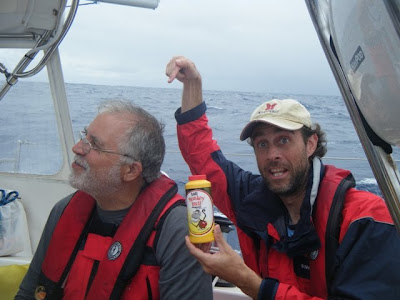 Well, this post clears up one thing for me.

I've always wondered why sailing schools have you practice cushion overboard drills so much. I would have thought it unlikely that a cushion might go overboard, since no one ever assigns a cushion to do foredeck.

But here you were, fearlessly challenging all that a third of the Pacific Ocean could throw at you, and damned if you didn't need to use those cushion overboard recovery skills.

We Laser sailors turn the boat on its side all the time. I never understood why big boat sailors think that this common maneuver is such a big deal. Thanks for explaining it to me. It's all because you might lose the cushions. We don't have cushions on Lasers. Thank you.

Laser sailors capsize because it's just their way of going to the head without making it obvious to every one in sight.

Capsizing isn't so bad. But if you get a Laser sailor on your big boat, watch out when they try to bring your boat into the "normally inverted position".

Pat you have given me a Gestalt moment:

Now I am clear and understanding why there is conflict within my crew!

Lasers have angle of vanishing stability (AVS) of maybe something like 95 degrees. I'm also guessing that the Catalina 30 has an AVS of maybe around 125 degrees.

The difference between these should give y a notion of your margin of safety or time to react if you have a Laser sailor on the helm of a Catalina 30.

They need the cushions for the naps, right?

Angle of vanishing stability? Stability? Does not compute. What's stability got to do with Laser sailing? My boat's not stable. I'm not stable. Stables are for horses.

ps - all joking aside, excellent account of The Crash. Exciting & scary. Thanks!

Pat, you're right, Lasers are different than Catalina 30's.

On the Catalina, stability vanishes when you empty the wine locker.

Verification word: anestor. Ane meens one in Scottish. Hence anestore is a place to store one bottle of Scotch. My Laser one bottle wine locker would work for Scotch too.

Hey I've been reading your blog for a while now, and I wanted to ask your advice on a matter. I've been buying my boating supplies almost exclusively from The Sportsman's Guide and their boating section. Do you have any dealer you prefer or have had good experiences with? I think SG is a pretty good dealer, but I'm no expert. Anyway if you have a chance I would love to get your opinion, thanks in advance and keep up the good work!