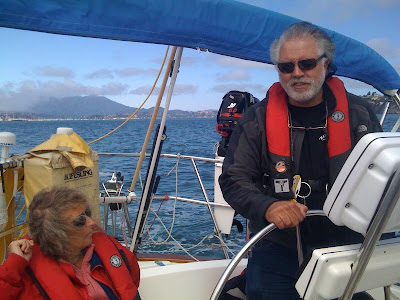 I took the day off of work to go out on my Pac Cup Ride, Valis. What an absolutely perfect day and I am fairly certain that a day off work wasn't the only reason.

Valis is a dream to sail in SF Bay conditions. You can reef up and down easily and quickly, she can handle 25 knots of wind without killing yourself, and she's a comfortable beautiful boat. I am psyched to sail her to Hawaii.

Paul and his wife Mary are also perfect hosts. It was just the three of us and conversation was interesting and effortless, they made very nice sandwiches and we even went to an excellent Thai restaurant afterwards.

Alright, here's the layout of our trip: we left Sausalito, rounded Angel Island (yeah, I have to work on my tacking angles), headed over to the South Bay, buzzing by Pier 39, did a u-turn at AT&T Park, then had an exhilarating beat back to Sausalito. The beat back was FANTASTIC; we did it on one tack, had a reef in the genoa and main and had a very comfortable 30 degree heel in 23-25 knots of wind. The rail was just short of being buried and the boat felt like it was on tracks. We probably could have lessened the weather helm a bit but it just felt good.

Garrett always wanted slow tacks on Oceanaire to be able to trim in before the headsail loaded up; I think Valis likes a faster tack since the primaries are bigger, we can rassle in the genoa even when fully loaded. It feels like she wants to bear off to pick up speed before heading higher but Phil worked really hard to break me of that habit, I might need him to come sailing with us to help me find a middle ground.

Even better than the boat, sailing for two weeks with someone as smart and interesting as Paul is going to be pretty good. I just have to read up on radio astronomy.

Thursday was an excellent day on the bay....so I'm not the only one who played hooky.

You're killing me! It's still a year till I'm there.

They took me to that same Thai place. I've nothing to compare it to, since I live in the land of 'cue 'n catfish. But I loved it.

Wait till you taste the fish tacos. I convert them from citizens of the ocean to chunks of meat and Big Paul takes it from there.