I like to do point to point races; it just feels like there's more of a reason to what we're doing. Going back and forth over a W/L race is like pacing. Kind of pointless. That's why the Three Bridge Fiasco, the Big Daddy, and the Great Pumpkin appeal to me. You're basically being timed on a tour of the bay.

The Big Daddy's Sunday pursuit race is billed as a little less serious than their Saturday races, they let in slower boats though the boats I saw didn't seem slow. We took it seriously but made it more of a family affair (more on that later).

The weather sucked; I had seen that the day before and pulled Camille out. She doesn't have foul weather gear and I saw no reason for her to go on a race where she'd have to stay below for 6+ hours. David, bless his soul, got foul weather gear for his 9 year old daughter the week before the race. Turns out, this was key.

We left Alameda about 9:30 or so, motored for a few miles and then set the spinnaker for the downwind journey over to Richmond. On our way there, we were hit by a few squalls and the weather just stunk. This colored our decision to start the race with the #2 Genoa. As we started, this became quite obviously a bad decision since everyone else was running away from us and pointing higher.

We decided wrongly to go CCW and committed to Raccoon Straits. This is when David made the BEST DECISION OF THE DAY -- he turned the tiller over to his 9 year old daughter. She steered her heart out for the next hour, right into the flood up Raccoon Straits. A bunch of boats passed us but I'm pretty sure nobody on that boat cared. Look at her smile! 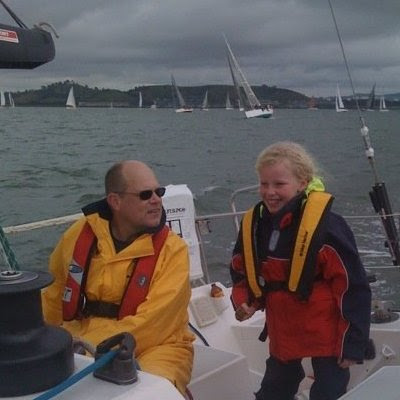 I know that those miles between Angel Island and Tiburon were my favorite of the day. David had to go down below for a while and I got to work with her on her steering, it was wonderful, she listened, she got the feel of the boat and more than anything she enjoyed it.

As we got around Angel Island, the wind was picking up and the weather helm was too much for her, we tacked to make the island and Little Alcatraz. As we got into the slot, we gave loud thanks to the #2. We would have been a mess trying to handle the big genoa in that wind. We saw the CW leaders passing us as we made our way to Alcatraz, waved to a few that we knew and just fought the weather helm the whole way over.

We finally made it over to Alcatraz and our downind shot over to Richmond with only one boat behind us, the Flying Tiger Savage Beauty. They were now in their downwind comfort zone and we had to hold them off to avoid DFL. We set the kite beautifully and David's older daughter took the helm and pointed us towards Richmond. Savage Beauty had to take a hotter angle and we were converging right at the finish line. They were coming in faster but we had "leverage" on them. We all leaned forward at the last minute and beat them by mere seconds. Victory is ours! Err, Not Last Place is ours!

Then David and I somehow enjoyed simultaneous mental meltdowns. We had to get the kite down with no room in front of us. Two good options: 1) gybe and take it down in the channel; and 2) raise the jib, blanket the kite and take it down right there ery quickly. We chose the bad option number 3, gybe the main while simultaneously trying to take down the kite on the wrong side in absolute full view of a marina full of boats that already finished. When David finally got our several hundred square foot nylon drogue out of the water, we had entertained perhaps 200 sailors. At least it wasn't my sail number being flogged in front of the masses, sorry David.

Afterwards, I really wish I had brought Camille, she would have had a good time. But we didn't finish last, we had fun, and half the people we talked to at the dock commented on our grinning 9 year old blonde helmsgirl. We didn't win, but she did.

I saw it, and it wasn't as bad as you imagined it.