Sounds like an excellent soap opera. But it's not, it's a race...a super race. I am joining David over at Never Sea Land for the Big Daddy Pursuit Race. David has an Olson 34, Temerity, that is in training for the 2010 Pacific Cup. Part of this training apparently includes bringing sub-par sailors and their 8 year old daughters out for a race around the Bay.

The Big Daddy is a race I've always wanted to do. It's a reverse start pursuit race like the Three Bridge Fiasco but it starts over by Richmond then goes around Angel Island and Alcatraz and then back to Richmond. I'm pretty sure you can only go one direction but I don't know that for sure. 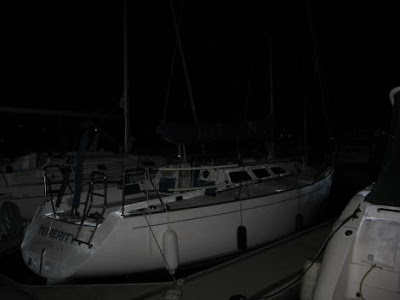 Since David doesn't have his own personal paparazzi (Zen, I have put a stamp on your thank you gift but haven't mailed it yet), I had to grab a picture of his boat sitting in the dock. We'll bribe some other racers to get some shots of us at the Big Daddy for the Temerity collection.

But there are two important questions. First, do you think both blogs will give the same account of the race (me for example: frickin' maniacal cap'n pooched up the start; him for example: how did that &*%#!@%$ guy make it all the way across one ocean and a third of the way across another?)?

Second question: what superhero am I going to dress as?

Once upon a time, I ran across an action hero quiz, as detailed in this post: http://itsfiveoclocksomewhere.blogspot.com/2006/04/action-heroes.html

Now, this is more about action heroes than superheroes, but you might just check out who you are. I rather suspect you'd check out as Jack Sparrow, with a possible Neo.

You can find the quiz itself at http://quizfarm.com/quizzes/new/Ian24601/which-action-hero-would-you-be-v-20/

(BTW, I tested out as Batman.)

So here is a challenge-

Does anyone know who Big Daddy was?

Hint: There used to be a buoy named after him, but it has been replaced by a bigger buoy, and his name is no longer on it.

Capn,
I believe the answer is in my article cleverly linked to in this very post.

I suggest "Trimmerman" or "Grinder Boy".

I like Trimmerman...opens up a lot of costume opportunities.

Yeah, come to think of it "Grinderboy" has some bad connotations.

You could always design your costume here!