The winner of the First Inaugural Annual Yearly Blogger Division of the Three Bridge Fiasco is: BreezeTrees on board his Laser 28 Firebolt!

BreezeTrees doesn't actually have a blog but is a loyal reader and friend of the program. I will be issuing him the badge as winner but will make a special concession to Valis as the winner with an actual blog and send him one as well.

Official Blogger Division Results
The blogger division was an absolute success from my standpoint. Not just for the five racers but we had two bloggers shadowing the fleet aboard the J109, Knots Squared. As this particular blog is about me, I'm going to write about my interactions with the other bloggers in the order I saw them.

Lady Bug got to the starting line about an hour early so we had plenty of time to drift around, check out the scenery and eat doughnuts. Just as we were starting to get ready to think about how we were going to attack the start, a boat motors past and yells at us. By nature, I'm an angry man so I got ready to rumble until I looked up and saw a tall guy on a Laser 28 motoring by. Hey, that's BreezeTrees! We waved and then didn't see each other again all day. We didn't see each other because he beat us by almost and hour and a half! This was his first race with his wife and I'm happy to report they're still married...but kids, don't try that at home.

Next up was the super surprise of the day, Lady Bug's own personal photo boat came steaming into view, Knots Squared. 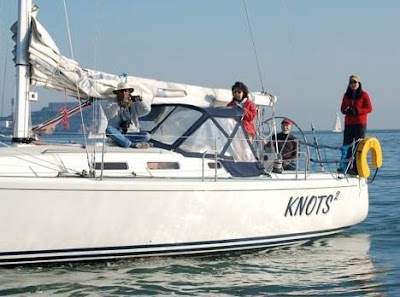 On board are Zen and Lady Zen, Captain John, and Admiral Anne (whose blog mysteriously disappeared). I awkwardly threw Zen the Z sign and he expertly threw it back! 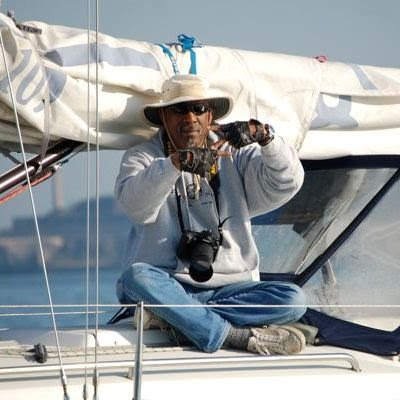 Then we sailed and sailed and blah blah blah and finally made it near Red Rock. I was intently steering, Phil was wearing the pirate hat, and I saw a boat on port coming towards us. I looked over at the Dread Pirate Phil and said, "that boat didn't round Red Rock, where'd it come from?"; he said, "watch your course, sheesh" or something like that; so I countered with "I've been itching to protest someone, fetch me my red flag!" Then I saw them waving at us, WTF? "Mess with the bull and you'll get the horns", I thought angrily, clutching the red washcloth that I use as a protest flag. "It's your friends stupid!" Oh, hey, it's John and Anne again, this time they're under sail! Just one of those moments that make you smile, we exchanged some pleasantries and they kept sailing, obviously enjoying themselves.

Fast forward past the bridge/current/hours lost incident and we're getting back into the race on port tack trying to cross a bunch of starboard tackers. We're very very diligent about letting people know our intentions as we duck some and cross others but we cut it very very close about three times. I mean so close that you can feel the anger-waves emanating from the other boats.

We finally made it to our tack and bust over to starboard, heading towards Treasure Island. I see a Catalina 30 looking to take our stern on port...the skipper is yelling at us. I look over at Phil, "well after that last 20 minutes, we deserve someone angrily trying to hit us"...I figured it was someone doing the same to us after they tacked onto port...you know, to teach us a lesson. They passed about 10 yards behind us (might as well have been a mile after all of our close encounters) and I hear this doppler affect yell of "it's O doooccccccckkkkkeeeerrrrrr" as he sails away. Holy crap, now I recognize that boat. O Docker was the only participant that I didn't already have a face to the name and I missed my chance. He then stayed West of us all the way to TI, got through the hole faster and finished a solid 40 minutes sooner.

That was the last blogger I saw all day, never seeing David from Never Sea Land or Paul on Valis. I did encounter a few Pacific Cup buddies on the course and have listed their results (Valis is on both lists).

Official Pac Cup Buddies Division Results
We're doing this again next year...maybe even for the Great Pumpkin Regatta in October so people, get your pens and tillers ready, it's sail blogging time.

LoL , Sweet! That was way cool!

By the way, Breezetrees may not have a blog as such but he does a section about sailing and fun on his website that is sorta kinda turning into a blog and that has a nice picture of his Laser 28.

Very true...that was the loophole that got him into the division...I hadn't seen the this-is-now-a-blog-confession. He's in.

I've also edited the post with the winner button.

Hey, there is the Sailstice in June...

I thought it was a very cool thing that the first time we ever actually met was:

- crossing tacks in a race

- in the Three Bridge Fiasco, a goofy parody of a real race

We must have picked up some magic SuperBlogger spray when we crossed. The boat just took off on that reach down to the Bay Bridge. We caught and passed a Catalina 36 all tricked out in waybad carbon fiber doodah racing sails that must have cost more than my whole boat.

Thanks for that, and for nudging me to get off my butt and enter this thing to begin with.

And congratulations to Breezetrees! The ultimate irony, not lost on Mr. Tillerman, I'm sure, is that we all got beaten by a Laser.

The sailstice isn't much of a race, unless you count it as a race to get that elusive dock spot at Sam's.

Mouette was the boat that very calmly pointed out that she wasn't turning and was on starboard at the bridge....

History will decide if it's a blog or if it is several paragraphs & some pictures of my boat.

Either way I'm displaying the trophy. This made the event a lot of fun, thanks Edward!

I built my trophy case, check it out! Click my name.
-Mike

EVK4, thanks for inciting me to enter the 3BF. It was a blast! I was looking for you, but no dice.

Did you get caught in the TI wind hole? VALIS took the "alternate" channel under the Bay Bridge, and rounded the Island far enough out that we had better wind all the way around. We, too, got sucked under the Richmond Bridge.