Me: "If I were a better sailor, we might have gotten through Raccoon Straits a bit faster. I should have seen that counter current coming."

Phil: "What are you talking about, we're in the lead pack!"

This was all true for about the next 30 minutes and I held dearly to that conversation. I looked at the leaders barely 100 yards ahead of us and I looked back at the hundreds of boats still behind us at the second mark of this very long race. And I was proud. 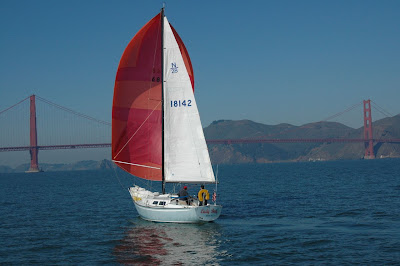 We had started well, setting the spinnaker right after crossing the line, executing a beautiful rounding, got up into what I now know is called a headstay reach until the wind clocked too much, doused and headed upwind for a while until the next shift, set the kite for a wonderful ride down Raccoon Straits, doused again as the wind shifted, then set the darned thing for the third time as we exited the straits.

Here we were, flying the kite comfortably, talking to fellow racers in the light winds, and keeping up with the leaders. Phil had the pirate hat on and all was good. We got to Red Rock, doused and tacked. Still good. But I wasn't pointing high enough in the light winds and the current was setting us back to the bridge. We had to tack again, and this time we were on port heading into a wall of starboard boats.

We had to tack again to keep from fouling a JS9000. Back closer to the bridge, we tried to tack back but the current was keeping my bow down, we were going sideways through the bridge. One last chance to not get pushed through, I tacked and of course, here comes another starboard boat. She said very calmly, I'm not turning and whoops, we have to take our medicine and let the current push us under the bridge. Now we're screwed.

On the wrong side of the bridge, we saw probably a hundred or more boats pass us as we clawed back up, trying to get current relief over by the shore. There was a bright side to all this, Phil very patiently taught me how to point my boat higher than I thought my boat could point. Somehow in almost non-existent wind we were making headway against a 3 knot current pointing at what seemed like directly into the wind. If he hadn't been with me, I'd be down in Vallejo still.

From here it was drift calmly toward Richmond. I then broke the tension and suggested if we were still off Berkeley at 5PM, we could just turn left and head into the marina. Phil didn't really want to hear that but I think he agreed. Then we started noticing something weird. The boats ahead of us were over on their ears. WIND AHEAD!!!!

We patiently sailed towards it and were suddenly engulfed in a 15 knot super-wind, completely blowing the remnants of that conversation off the boat. We were going to make it. Our only decision was whether to try to go under the Bay Bridge in the construction zone or the "safe zone". The construction zone was closer, that made the decision easier.

We got under the Bay Bridge and then, suddenly, another parking lot. This one was bad. We had a mild ebb pushing us backwards but about .2 knots of breeze to fight it. We set the kite for the fourth time and just eked out every bit of boatspeed we could. We could see our windline about a quarter of a mile ahead of us. It was 4:30. The decision was made that if we could get to the windline by 5:30, we could still make the finish.

We'd had the radio on the RC's channel for the past hour or so and had heard dropout after dropout; all we had to do was finish and we'd beat those guys. But still, covering half a mile in an hour seemed pretty difficult when the speedo read 0.0. We were passing boats and the ones behind us seemed to be falling backwards so it must have been a rounding issue, we were at 0.049 knots maybe. I'm going to drag this paragraph on and on so that you can feel what it was like to go that slowly. The word for it is "interminable". We could see the windline and the few boats that were making progress through the hole would just take off as soon as they hit it. Somebody needs to shorten that island or put a tunnel through it so the wind can make it through. Then, finally, the wind switch was turned on as we hit the windline at 5:31!

We were able to hold the kite for a few minutes longer than we should as we saw our Pac Cup team-mate coming back from the finish, we realized it was worth missing the finish so that he'd see us fully spinnakericized as he passed. But it wasn't him...damn low light conditions. So we doused and started our uphill climb to the finish line.

It got dark right after we passed under the bridge. We stayed on one tack up to Alcatraz, tacked over to Ghirardelli Square, back out one more time, back into Fort Mason, then one last tack to the finish. I got out my flashlight and we headed right for the pin end of the line. A J80 passed in front of us, tacked over and we had a drag race to the finish. I lit up the sail, we heard two quick hornblasts indicating that it was a photofinish with said J80. And we were done!

We had finished the Three Bridge Fiasco with 15 minutes to spare! A complete and total victory. 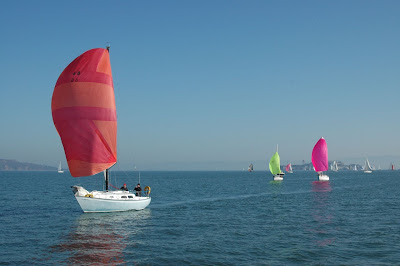 Note: The blogger division was a success and a non-success, I saw a few of the other boats and didn't see a few. All blogger interaction will be covered in a separate post so I can give it its full due. But I will mention that both photos in this post are courtesy of Zen.

I've been in that area by the Bay Bridge fighting the current with no wind. yuk!

And props to Captain John for his great boat handling of the MotherShip in the mist chaos. We were not in "Knots" but very "zen" (^_^) !

Thanks for that recap of rounding the red rock. We ducked out of the fleet so we would not interfere with their efforts during the rounding. Caught some light air and got back in the fleet in the current cone of the rock. Took stern after stern after stern and headed across to Paradise to get out of the way. Just then, a Chevron Tanker with escort tugs made its way through the 200+ boats interfering with it’s commercial duties in a narrow channel. It was really something to see the dance in slow motion as the lead tug cleared a path for the ship through the immense fleet. Had you not been taken north of the bridge you would have been right there. Did you catch any of that action?

John,
We heard the five blasts and thought that at least those DQing themselves were now behind us! It will be interesting if nobody dropped out for either of the two five-blasts of the day...that can cause quite the storm. Also, a lot of people in close to the long wharf and inside Anita Rock.

The awards meeting is on the 11th...might make for some fireworks.

The results are in and that J80 beat us by 2 seconds!

I've never seen a windhole so sharp-edged as the one at TI. A boat two boatlengths in front of us popped out and was a half mile away before we made it through. Next time, we'll make a wider loop and stay farther from the island (see the Valis blog).

Lady Bug looked fantastic reaching across the slot (with the wind from the 'wrong' direction). With no spinny, we sat back and watched you disappear. I thought that would be the last we'd see of you.

But the race really showed what makes the Bay such a great and challenging place to sail - think of all the different conditions we saw in the same day. That, and we were in shirtsleeves in January.

What a warrior you are EVK4, fighting uncooperative mother nature 'till the bitter end and won! Congratulations.

I laughed delightfully reading the description of your race. Being out there, watching what everyone was doing and taking many pictures of Lady Bug, I was dying to know what transpired on that distinctive blue hull boat.

Has anyone wondered what ever happened to those people going the 'other' counter clockwise way?

Awesome race and excellent account. I wish I understood half of it.

That is why you need to come to the left coast T-man. Do that road trip this year. Load up that Lazer on a trailer and do a road trip, make those sail stops on your bucket list.

Congrats! Great story. To have finished the race with all of those current and wind and wind-LESS conditions is so admirable. Sorry to be greedy and always asking for more, but... Would you be willing to share Phil's secret for pointing higher, pretty-please?

Here is the story from Lat38;

Thanks for the link, Zen.

Latitude notes a lot more boats in the 3BF this year than ever and asks:

"...Why the sudden increase in participation? We're not sure, and we're not arguing..."

Well, readers of the SuperBlog know why.

or in the lead pack

I came back to this post (it’s been a very busy week for me), and realized that the photos posted here tell an interesting tale. Within a 1 mile radius of Lady Bug are 360+ boats. Yet, it looks like Edward and Chris are out there all by themselves. This blog really is all about Edward. Either that or Zen somehow reshaped the universe to isolate Lady Bug.