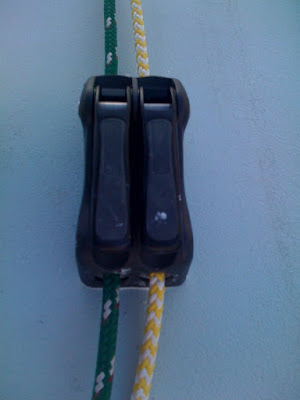 The other night I was congratulating myself for getting Lady Bug all spinnakericized. I was actually pretty proud of myself that it had only taken three years or so to do it. I realized that I now had to update my "play book" (that powerpoint that tells new crew members how we do maneuvers on the boat, where to sit, etc.).

So I was visually how we'd hoist, gybe, douse. Hoist made sense, get the pole sorted, raise the kite, sail fast as hell. Then, the gybe routine...whoops, a hiccup. The topping lift and the halyard were sharing a cleat and the topping lift would be under the halyard; so to gybe, I'd have to uncleat the halyard...whoops, big issue.

The thing is I've had a new rope clutch ready to install for this very reason for about two years but I've never done it. And now I only had three days to get it done. Crap crap and double crap, I'd have to take an afternoon off work. But it's a two man job, somebody has to hold a wrench down below while another person holds a screwdriver on deck. And it's during a work day so there was nobody who could help.

Turns out that if I don't mind bruising myself and stretching into uncomfortable positions it can be done. I drilled the holes, I gooped everything up with 5200, I put in the bolts, I contorted and twisted until I could wrench the nuts onto the bolts from below and, voila, I had a rope clutch installed.

Quick, how long until 5200 cures??? I undid everything I had just done, pushed and prodded until the darned thing came off the deck, flipped it around, re-gooped, and repeated the whole process. Success! I ran the lines through and they hold. I can officially clutch ropes now. 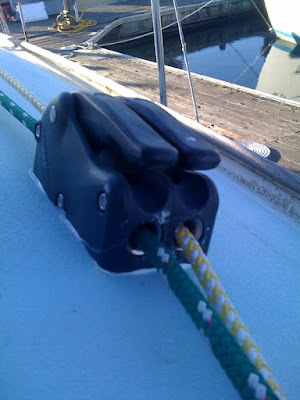 You have a Powerpoint presentation that tells new crew members where to sit? You are my hero.

The summer I tried crewing on keelboats, neither of my skippers had a Powerpoint showing me where to sit. I never did learn where to sit.

Do you have little labels on the deck that tell the crew where to sit too?

You only had to do it twice?

Any job like that always takes me three times before it's right. Well, except for the leak.

Where is the live blogging of the Free Bridget Fandango?

Do you 'formally' present the information to new crew, with a laptop and such? Does the .ppt have interesting 'transition features' and the like? I really-really-really demand (meekly and politely) that you share it with us. Powerpoint itself is hilarious, and laughing at people's powerpoints (meekly and politely - BWAHAHHAHAHA) is sometimes the only thing that gets me through the workday.

Also, re installing your rope clutch backwards.... I feel your pain, man. Nice job figuring out the problem and fixing it so quickly.