It's been ten days and the strain of competition on the open ocean is showing on the competitors. With a vast windless doldrum opening up to the South of most Virtual Volvoers, many have had to reconsider their strategy and strive to get west. 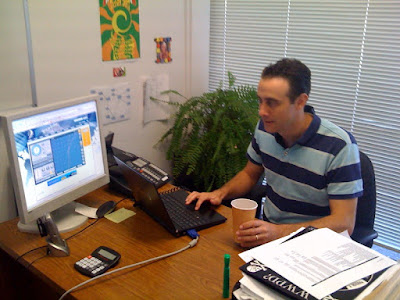 More coffee is being drank and alarm clocks are going off at all hours. Spouses are grumbling at the middle of the night course adjustments and sail changes. Nothing annoys co-workers more than interrupting a meeting, "it's 3PM, hold on, we have new GRIBs and I need to change my course, be right back". But it's important, you don't want to wander down into that windless abyss.

Some racers are hitting the forums to keep their addiction alive. Noted racer AWASP states, "Can anyone tell me how I'm going - AWASP ? Although I will be checking in the next hour when I get home but need to know , love this game , might have to start 4hr watch system ....... ok just more beer then". The strain is palpable after ten days.

Racers are even going after each other, a gentleman's sport gone awry:

Some say it's just a game but after ten days at sea and thousands more miles to go, it's obviously much more than that. It's the Volvo Ocean Race Game.

Can you file protests against the other sailors?

Edward, I've always thought of you as a sailor - period. The sight of you sitting behind a real grown-up desk... with a green highlighter pen and a desk calculator and what looks like an org chart or process map (shudder!) on the wall beside you... is a little shocking to behold. It's going to take me a little time to accept that you have this whole other 'onshore' life.

Christy, if it helps, in the lower right hand corner of the picture is a game called WWPD (What Would a Pirate Do) which helps me make many "grown-up decisions". For example, when contemplating how to respond to your comment, it said, "maroon a scallywag." I now have an ex-employee stranded on Angel Island.

Can I get a copy of WWPD? I have many scallywags to deal with and grumbling arggh amongst them is not helping matters as I'd hope.

Um, didn't I just see on the news recently that there was a wildfire on Angel Island?