Finally, A Motor Round the Rina

It's been three years since Noah was born. In those three years he's left the dock twice. Once, he was too young to know he could pitch a fit and just sat on his Mother's lap completely comatose. The second time, he was lured out by the promise of seeing the Blue Angels but he turned out to be deathly afraid of the planes AND the boat. So no luck getting him ever since.

Mind you, I tried. He and I have spent scores of hours just hanging out on the boat, playing with the winches, doing pirate games, reading books, and making it a comfortable enjoyable experience for him. But the second I went near a dockline or tried to turn on the engine, hell would break loose. If, by hell breaking loose, you mean a screaming fit-throwing whirling dervish of a possessed toddler intent on piercing your eardrums and destroying your sanity.

Given his well known fear of wind, I developed a strategy. I told him we would just motor around the marina; he would agree to this and then, at the last minute, freak out. He agreed to do it maybe 5 times and would always back out some time before we got to the docklines. Some times, I'd have enough warning to just avoid going down there but others, it would be literally last minute.

Some hardliners would suggest lashing him to the mast and just going but my first rule of sailing involves making it fun for kids. If I want him to crew for me and enjoy sailing in the future, I have to make it fun now. So, I have waited patiently.

And, this weekend, the patience paid off. Camille, Noah and I headed down to the boat. And we motored round the rina. Noah was a little nervous but found out the noise of the engine wasn't so bad if you're not screaming. And he discovered that water comes out of the transom; he absolutely loved watching that.

Noah looking odd and nervous as we started: 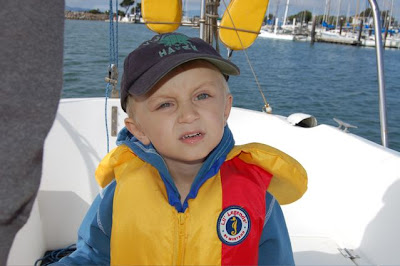 He eventually got better and even relaxed for a while as Camille steered us expertly around the "rina". 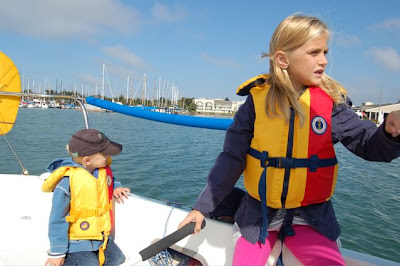 We visited Polka Dot's old slip, scouted out the new pump station on H dock, saw where our favorite boat (Pomodoro) lives, and avoided all those pesky OCSC boats in the fairway. No more than fifteen minutes away from the slip but more valuable than any sail I've had in the last three years!

Soon he'll be doing foredeck for you and you'll be winning races.

And soon after that he'll be doing foredeck for his GF's dad and beating you in races.

Good on ya, Noah.


He DOES know that he's named for the world's first naval architect/boatbuilder? And the only one to date to ever finish a project on time?

We bailed a number of trips early due to sea sickness or fear of heeling on the youngest's part. But now she is pretty keen to go out, especially since we recently increased our boat length by 2X and mass by 20X.

David, we did the same technique with Camille. I don't think she knew that boat's heeled until her first race. I was so scared taking her out on a race in 20 knots of wind going hard to weather until I looked back and she was casually holding on to the backstay line reading out our course and speed off the GPS.

Is your favourite boat Pomodoro the one "at the end of J-dock" Pomodoro?

Why yes it is Ismail Onur Filiz. Is that your boat? We just love the name and color...they go perfectly together.

Well, the boat belongs to Cal Sailing Club, which I am a member of. If it helps the little ones getting to like sailing more, by the way, I would be happy to give you a ride.

Ismail,
That explains why we see her out so often. Camille and I just enjoy that there is a boat so perfectly named; no need for a ride. I really appreciate the offer.

Hope to see you out there. Look for us, a blue Newport 28 named Lady Bug.

Made me smile too. Thank you, Andrew