A Short Tour of the Marina

This may be my last time writing about motoring 'round the 'rina. It took convincing again but I got Noah to agree for another short tour (just the two of us). I think he's ready for the next step.

This tour was noteworthy for the fact that it was actually a tour. We went over to O dock, the pumpout station, around the fishing boats and just saw a lot of the marina. Noah positioned himself in the V-berth and would pop up and down like a meerkat. 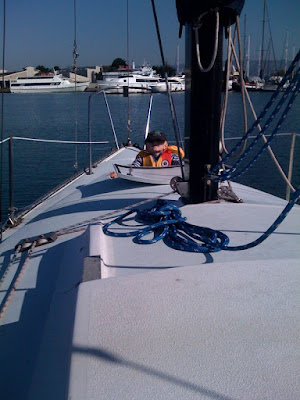 There were people around so it must have looked and sounded to most that I was motoring around yelling at my boat but really it was the tiny head that would appear and disappear up at the bow. If you're reading this now, I am not crazy! Really.

Noah had a real interest in one "boat" in particular over by the fishing dock. I had always assumed it was like a little tiki bar on the dock where they sold bait but it turns out to be an actual floating contraption of sorts. This picture doesn't really show it but it's a raft with a palm structure on it. I've never seen it move so maybe it's like a houseboat that way. 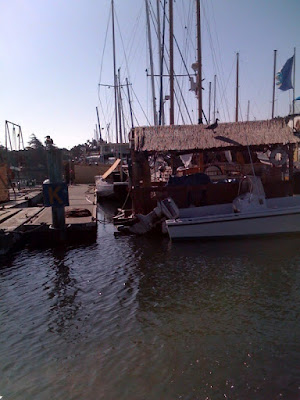 The important thing is that at the end Noah agreed to raise the sails next time. I got that on video so I can show him his legally binding agreement that we will sail. Oh boy, we will sail.