Sometime Saturday (and I truthfully do not remember when), I crossed the line. Virtually. But, as a Serious Off-Shore Virtual Racer, I had some serious virtual ceremonies to put my serious virtual crew through. 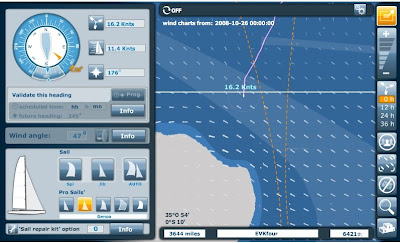 At the appointed hour, Virtual Neptune (VirNep) boarded the good ship EVKfour. The assembled masses, virtually the whole crew, trudged fearfully before him. VirNep demanded that they bow their heads before him and with one fell swoop of his Trident Razor, he shaved 'em clean. He then put in front of them a bowl of foul squid tentacles and demanded they eat. Upon completion of this task, he doused them in some sort of vile liquid (Miller Lite?), bequeathed the shellback title upon them and hopped off the transom.

So, they've made the plunge and are shooting South along the South American coast in full reaching mode. Now that we're virtually official, the race can only get better.

Sounds fun - wish I had the time to join you in the race!