Day 5: Where are the Tropics Again?

By all measurements the first 400 miles were done, a distant memory. I'd been warned that the first 400 miles were cold but then we'd get to the good part, warm weather sailing. In fact, I'd been sure to brief everyone that the reason I was doing this race was that it got warmer every day rather than colder. We'd covered over 400 miles, our daily runs had been 145, 181, 181 and 188 nautical miles, by mid-day we had only 1468 nm to go so we'd covered 600 miles made good. Then why in the name of Helios was I still wearing thermals?

One thing I couldn't complain about (and really what's the point of a blog if you're not complaining?) was the food. You've all heard about the fish tacos but for breakfast on day 5 I had cinnamon buns, hot sticky cinnamon buns...who gets cinnamon buns in the middle of an ocean? Oceanaire's crew that's who! And, fresh from Ronald Reagan's theory on trickle down meal planning, since we had the fish tacos for dinner on day 4, we had day 4's original dinner for day 5's lunch, Pesto Ravioli.

Since the sun hadn't yet come out we were still definitely in "gray monotony" but it was still oddly beautiful. It might not be possible to describe how beautiful yet boring it is out there. The waves and swells have never-ending combinations: up down crash break with white caps appearing out of nowhere as one wave decides to combine with another unseen wave to suddenly be 5 feet higher than anything else in sight. It would take the superest of all super computers to even attempt to make a mathematical model of even a small area of how the ocean waves form. While all this is going on, Oceanare just cuts a beautiful 8 knot wake right through it. When the boat really plows into a wave it creates a loud brilliant blue froth of little bubbles. Of course, the wake disappears 20 feet behind the boat, leaving no trace that we were ever there. 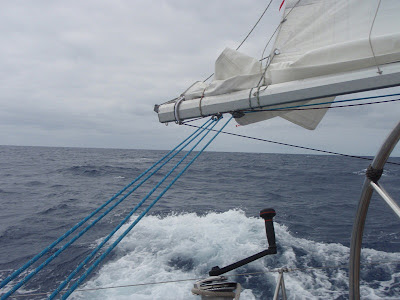 We'd been on starboard tack the entire time (save for a few tacks to get out of the bay) and were laying just a tiny bit south of the Great Circle line to Kaneohe. These few days were our fastest of the entire trip as we had great wind and were actually on a "reachy" point of sail. The wind forecast made it look like we might be on a reach the entire way; imagine sailing to Hawaii with white sails alone. Luckily (and I know this now) those forecasts were wrong. 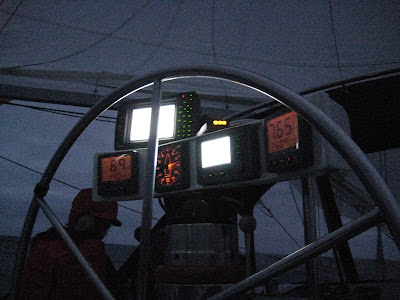 I spent more time staring at the horizon, puzzled why I never saw another boat. I knew they were out there and just by coincidence we should see some other boats. On the Atlantic, we saw sailboats all the time, at least once every day or two, more when we were this close to land. I commented to Phil how boring it was, looking for sails and never seeing them, but that it sure beat being below watching movies. Mr. Phil-osophy summed it up perfectly, "you can see *that* in your living room, but up here is the only place you can see *that*". How true, water, water and more water; possibly the only view that is equally as calming as it is exciting. 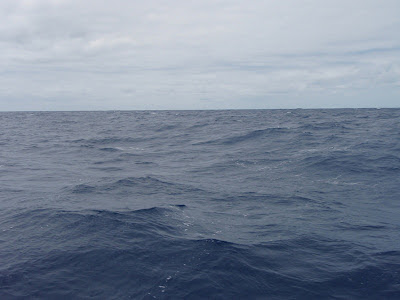 Next up: Day 0: Operation Bootleg and Day 6: The Most Perfectest Day Ever.

Great post but can we have more terror please.

A quick post from the skipper. I have been reading these "blogs" for the first time and I guess I can say that one interesting thing about this trip was the lack of some,not all of the crew being patient enough to come to or "find" their own realization's of what it means out here to them rather than seek a mentor to frame that experience. For me I can get drunk any old time at home. If I "sneak" something to get a thrill out of it, it ain't beer or other "stuff aboard" a yacht traveling across the Pacific in order to "frame" my expectations of an ocean passage. Maybe a 10 carat diamond from the Royal Palace! I`m not a big writer either, I spend 16 hours a day re-creating a business that supports 100 families,I create all my waking hours as an entrepreneur.So I guess the one certainty when you do a trip like this is not putting into box's what is good and not good,right or not right or what one should "do" on this type of trip. Just let people experience it the way they want to experience it. The more original the better.Whether I think I would like to do it that way or not. For me,not drinking for two weeks was a relief since I do to much of it as a professional businessman. Watching DVDS while I listened to the water passing under the hull,feeling the boat "working" and navigating and weather routing full time was different. As I never have crew aboard to let me experience that,it was just what I needed. I had nothing to prove on this trip. Doing a long Ocean Passage alone you get plenty of self confidence and a completely different experience. Doing this crewed was easy by comparison. But that said also much more enjoyable in many aspects. Its interesting to know that no matter how much experience a crew has the responsibility of being the skipper put a very different spin on this trip for me. I let my employees get away with little things they think I don't know. It gives them a bit of control it seems everyone needs and it was fun, that said my primary responsibility was to keep them safe. A challenge at times I will say! That said, I learned a lot from each of them. I hope they learned a bit as well. We had all types on board,romantics,cynics,buffet's, and skipper, me! I thought they were all good rolls to play. So if you plan on doing this for the first time don't ask a veteran what to expect. Let it come on its own, be safe,don't assume cuz you got there your philosophy is bullet proof. That kind of thinking will eventually get you killed. Although some folks might secretly want that too? Who knows. Keep an open mind,keep learning and keep pushing yourself to grow. Find a mentor who will encourage original thinking from you,not dictate. if you find that you will be truly empowered. Thanks again to mine, Rob McFarland,not to be confused with the other McFarland his cousin as they joke who traveled with us. Rob has always been supportive but always stops short of giving me the answer because I believe he wants me to find my own experiences,not live his. Thanks Rob. Garrett

Cap'n G,
Wait until you see day ten...a whole page on the skipper's responsibilities...you'll love it.

EVK4
Maybe you had this passage made way too easy for you , a safely equipped boat, food for your belly (when you weren't sea sick), good company if you appreciated them.
Hope you have more in your memory than "you".
And the "terror", really is that a nescessary part of the voyage? Not according to sailors that I talked to that did this Race in 1998!
Do enjoy your "diary" though, more pics!!!
Ginni

"as calming as it is exciting."
that was deep!

Ginni, I hope it doesn't come across that I didn't appreciate my crewmates and the boat but if you read the 500+ sailing related posts on this blog, this is the voice I write in. I make fun of myself first, friends second, and everyone else third. It's the way of the blog.

As to "terror", I wrote about my Atlantic crossing years ago that it's mostly boring sailing punctuated by moments of sheer terror. This was brought up by a regular reader and master blogger, tillerman, and I'm playing up the lack of terror. I've been on the foredeck in gales with tropical reefs mere miles away, I don't really want that terror again, I'll take the gray monotony any day.

That's OK Edward. The story about Hurricane Cleo by the guest blogger on Proper Course will have plenty of terror in the next few days. You can go back to writing about monotony.

By the way, I loved the skipper's comment even if I didn't understand half of what he was trying to say.

Regarding "By the way, I loved the skipper's comment even if I didn't understand half of what he was trying to say.", I would boil it down to I offended him (and maybe some of his friends).

Of course you offended him. That's the beauty of blogging. We can offend our wives, our friends, and thousands of complete strangers every day.

But I'm still unclear as to what exactly offended him. Was it that you guys smuggled beer aboard? Or that you implied he drank some of it even though he says he didn't?

Or was it something to do with all that "let it come", "be truly empowered", "find your own experience" mantra? I have to confess that all that stuff was a bit too left coast for my right coast left brain mind.

It might have been that he feels I accused him of watching DVDs instead of experiencing gray monotony with me up on deck. "You suck if you don't stare at the water" might have been implied or maybe inferred, one of the two.

There's also some inside the locker room stuff hidden in that comment that I'm not likely to share with the world, possibly we can go offline on this one.

Wow, I got it! I liked the skippers post, for the most part. However it was a bit contradictory. Because you were talking about YOUR experience YOUR view. A Blog is maybe the last public ventue where it can be ALL ABOUT YOU if you so desire. So unless he was paying you to write a documentary about the boat and the trip. Write whatever you want in any style you want.

You got to be a 3 times top ten in the T-man's list not by writing what someone else wanted, someone else's experience but yours.

HE was self admitted that he was new to reading blogs, therefore get some further blog time would be better, than pointing fingers about your lack of vision or something.

The skipper did have a interesting post, even if self centered about him. Maybe he should have his own blog, it then then be all about him or his crew or whatever he wants.

I'm a bit sensitive about evaluations right now. so sorry. :-)

Regarding: "It might have been that he feels I accused him of watching DVDs instead of experiencing gray monotony with me up on deck. "You suck if you don't stare at the water" might have been implied or maybe inferred, one of the two."

I want it to be clear that I don't mean that at all; my choice was to watch the waves, there are tons of ways to enjoy the ocean. I just think that Phil's comment really highlighted my philosophy well.

Hi, I was once crew member on sailboats across the South Pacific. I confirm that "there are tons of ways to enjoy the ocean". People who are easily 'bored' are bloody boring!!!