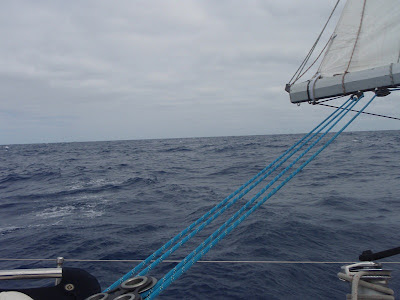 The 18th was pretty much the same as the 17th. The swells were bigger, maybe 8 to 10 feet but the sky was still gray and overcast. We had good wind and were going 7.5 to 8 knots most of the day, in fact our day's run was 188 nm, the best of the trip so far and the farthest I'd ever gone in one day.

Oceanaire handles the swells beautifully, you get to the top and just carve a course down the side, veering back on course with a loud swooshing sound. Then you get to the wave in front of you and you can just feel the boat displacing its 47,000 pounds as it slows back to hull speed. Basically, every time the boat travels 47 feet, it displaces 5875 gallons of water. I'd hate to be a fish getting in the way of that bow wake.

At 08:30 the highlight of the day happened. I looked back over the transom and saw our lure was splashing a lot more than it should; I, of course, didn't have the presence of mind to yell "fish on" or anything cool like that but I did run over and hand over hand pull in the fish, a beautiful female mahi mahi. Our lure for this one was Blue Meanie which looks just like the flying fish that we found on deck. You trail it out in the most turbulent part of the boat's wake and the fish think all that activity is a school of fish. But, in reality, it's our devilish fish lure, ready to capture the little bastards for our dinner! Haha, take that Nature! 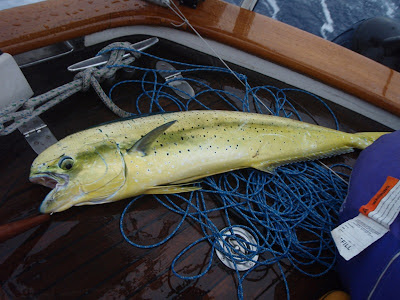 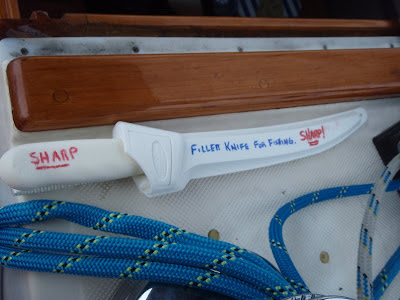 We had fish tacos for dinner, it tasted much better than it looks in this picture. 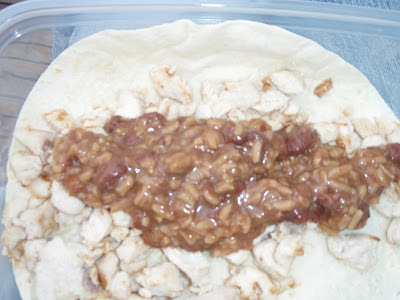 The entire fleet was now about 100 miles west and north of us...possibly knowing something that we didn't or possibly they just like faster points of sail and were happy to give up miles to go faster. I'm pretending right now that this isn't the future and that I don't now know the answer to this question in retrospect. Look for more musings on this when I bemoan our rhumb line course in the next couple of days.

A great and brave and improbably handsome sailor once stated that ocean sailing is mostly boredom punctuated by moments of sheer terror. I think he was talking about the North Atlantic, not the Eastern Pacific in summertime. If 20 knots of wind and big swells cause terror, you're in the wrong game. But there was something terrifying about Oceanaire, a looming and frightening terror that I call the Nav Station. It's where blogging was supposed to be happening and I still had the taste of mal de mer fresh on my mind and wanted no part of a small poorly ventilated part of the boat where I would have to stare at a small screen and type while the boat rocks back and forth. Eeek, scary.

Rather than be down below tempting fate, I continued staring and staring at the ocean. I saw a whole "gaggle" of birds diving on the ocean, obviously in a feeding frenzy. I got excited and started motioning for the fish to come on over and enjoy a feast of our tempting lures but no luck. Which was fine when I saw the pod of dolphins come over to join the smorgasbord. I didn't want to accidentally catch a dolphin. At least I got to see a few more of them, we were at about 40 spotted at this point.

Unfortunately, I had ignored all advice on "seasick" day and had gotten a pretty good sunburn in the small part of my face that wasn't covered by a hat and foul weather gear. This was the "red" portion of my trip. 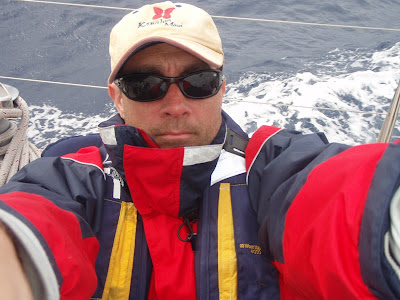 Next up, Day 5: Where are the Tropics Again?

Obviously, you should have been at the helm more. Then, maybe Oceanaire would have done better.

More important, as a British chauffeur once pointed out to me, the driver never gets motion sickness.

These blog entries are great, man. I get so excited when I see what the next day brings. Even though it's not in real time, it's as good as getting emails & calls from buddies sailing. Love it! (Especially good reading when I'm stuck in an airport...)

Carol Anne, agreed on the driving re: motion sickness. Downstairs was the real culprit. Damned cabin. With regard to finishing better, we had some very very very good helmsmen on this boat, my snake-wake would have hurt big time later on in the trip when the swells got confused from the squalls. I'll probably write about that.

"We had fish tacos for dinner, it tasted much better than it looks in this picture."

Whoa. That's a serious understatement. Looks like maggots got into your gruel. Yikes! I'd rather eat Dinty Moore and grits than that.