I awoke on day 3 to Phil and Charlie discussing whether they wanted to play music or not. My first words, "do you want me to sing some sea shanties for you?" was met with a chorus of "he's back!" I had still spent the night in that cockpit, sort of like that crazy aunt that comes to stay with you for a week and never leaves the living room couch but at least I could talk, eat and move. I was deathly afraid to go down below, at one point considering if I could make 2 weeks living in the cockpit. I was dressed, I had a good spot, I could use the rail bathroom for most business and I was really close to the galley. There were some problems to overcome but I was trying to think of how to avoid those. 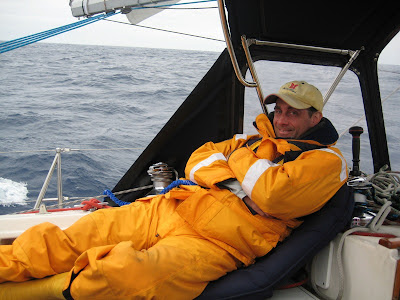 We were really in the Pacific Ocean now, with big blue swells, 15-20 knot winds and lots of rolling action. We did a 181 nautical mile 24 hour run so we were booking along, on a bit of a broad reach for the first time. I still wasn't pulling my weight on my watches so I can describe the sea state but not really how the boat was dealing with it. Felt good from my perch.

The weather was still overcast, windy and cold. Full foulies and thermals were the order of the day; the whole crew was on day three of wearing the same warm clothes but you couldn't smell us through our foulies. As I said, I didn't go below so I have no idea what it smelled like down there. The cockpit was nice and warm and smelled like ocean. 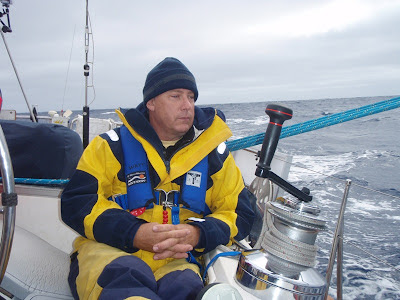 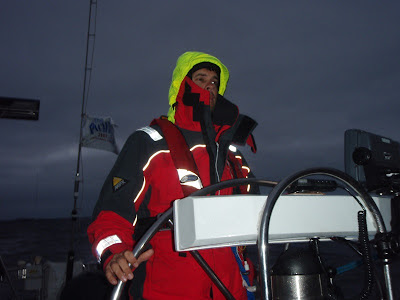 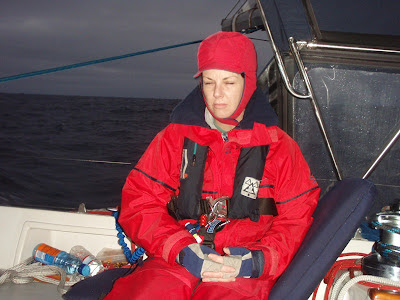 We "caught" our first four fish: one flying fish and one sardine on deck, and two tuna that supposedly slipped the lure. At that point, I was skeptical of the "tuna" but further success makes me think it might have been true. The sardine and the flying fish looked very similar to the blue meanie lure on the port line, leading us to believe we were trailing the right lures. 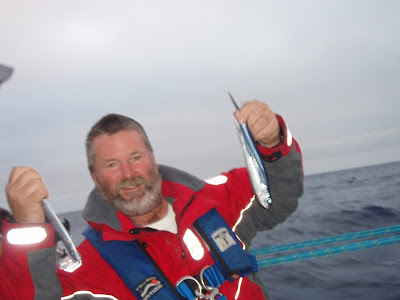 My whole day was spent slowly building strength back up and getting warmer. I had a goal to sleep down below but I'm not sure everyone wanted that. Sleeping accommodations were much easier with three people vying for three bunks than four for three. And I like to think it was comforting for the other crew to think, "at least I'm not that guy!" 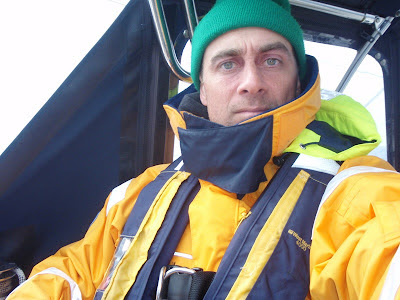 All the other boats were scattered at this point, starting my long futile search for sails on the horizon. The seas weren't all that interesting, the really big swells hadn't started yet, the grey was omnipresent and no sealife since the first day's dolphins. And our dead fish on deck, we did have that going for us. And yet, I stared and stared waiting for something incredible to happen out there.

Next up: Day 4: Gray Monotony and Sheer Terror.

I'll glamorize it a bit...we did catch a fish that day.

Was this your first time getting seasick?

Didn't someone once say that ocean sailing is days of mild boredom interrupted by moments of sheer terror?

Can we just skip over the mild boredom and get to some of those moments of sheer terror. I want to hear about the terror.