Day 2: The Day of the Seasickness

This is the day I don't want to write about; in fact, I'd prefer to not remember it. The day started wonderfully. I was on the midnight to 3AM watch. Garrett went down below to his "office" so that he could resume his role of "all seeing eye". We had passed the Farallones at around 10P and most of our shipping friends were now behind us.

I took the wheel at 12, doing about half hand-steering and half auto-piloting. It turns out that there was more wind in the fog so we hunted for dark patches. Good news: wind. Bad news: cold and wet. Since we were still pinching at 30 degrees off the wind, we needed the wind. If it got too light, the auto-pilot couldn't handle it, so I wanted wind.

Phil and Charlie came up for their watch, I went below to pull off my foulies to the far off shout of "higher, 30 degrees!" and go to sleep.

That's the last that I wrote in my journal on this day because as soon as I went below (after writing in my journal)....oooouuuuuggggghhhhh, I didn't feel so well. It hit me the second I went below after not having a single symptom prior. I ran up on deck and didn't exactly feel better but at least I didn't have to throw up. I decided that given my condition, I was sleeping on deck. By morning, every watch was just kind of used to me huddled in the cockpit looking ill. I finally threw up in the early morning and guess what, that didn't help.

I spent the day (and the next night) alternating between the beanbags on the aft deck and the cockpit. Nobody wanted to look at me (there were two others that were not feeling well but nowhere near as bad as me). Just looking at me could make it worse. Seriously, I was green. This wasn't helped by my bright green watch cap and my green hood on my foulies.

I would take the blankets off for my watch and kind of help when needed. When I was taking up room on others' watches, I'd pull on the vang if necessary. But overall I was useless. I described it in my journal the next day as a "throw-up can't move devastating kind of seasick". And that was it.

The worst part about the whole "adventure" is that I was really too sick to take good advice like "hey dumbo, put some sunscreen on your face" and "dude, maybe drinking this coconut juice would help". The next day I took the advice and started eating but for the 16th all I could do was ignore the very helpful suggestions of my crewmates. And get a sunburn.

Thankfully there are very few pictures of this day. Though this first one could be used as promotional material for the Pac Cup with the well-placed position of the flag. 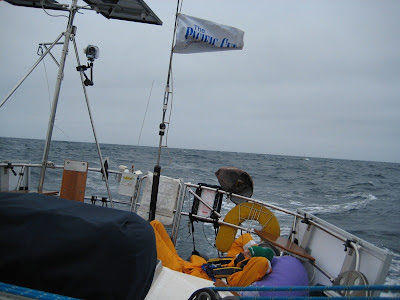 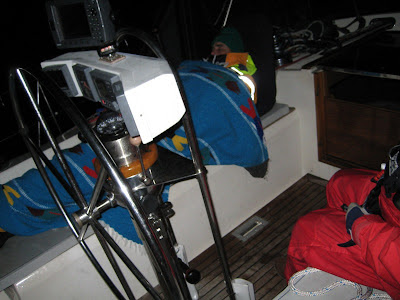 Next up: Day 3: The Real Race Begins.

So you did wear a patch I take it. Many swear by them!

Grateful for the truth! Seasickness does occur on the second day at sea and it doesn't spare anyone!!! I had a good formula for pills... shall look them up and pass the info.

Me again. Here's the anti 'mal de mer' medicine I had from an American sailor who had asked the secret from the nasa people...

This was readily available in 1995. Somehow nowadays they refuse to deliver the stuff. I'd like to know why. I've tried the ersatz but it doesn't work.