Day 1: We leave for Hawaii

Once we cleared the treacherous St. Francis Yacht Club Sacred Fishing Grounds, we were off and sailing for Hawaii. We were on port tack, heading for the bridge with a few dozen of our closest friends. It was apparent that racing day increased the intensity of our sailing efforts. Darren and the crew went into full-on speed mode: 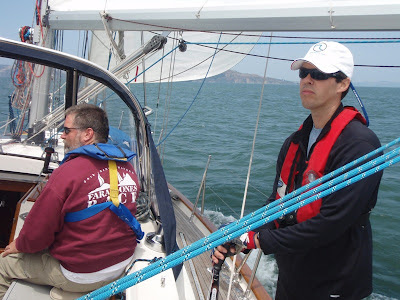 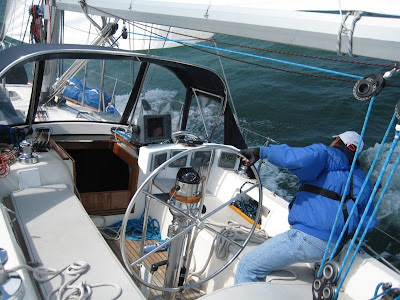 Until he (and everyone else) pulled out their phones to start calling people, "hey everyone, we're racing to Hawaii, look at us!" My phone was dead so I just took pictures. 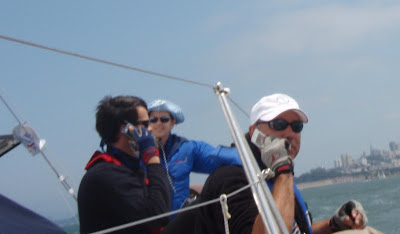 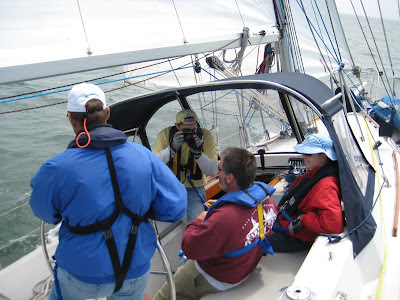 We figured out pretty quickly that we weren't the fastest boat, though we had more beer (more on that later) so it was kind of hard to care about speed. We ended up ahead of only a few boats when we got to the bridge. By the time we hit Pt. Bonita we were ahead of Bequia in our division and Horizon Hunter in the division that started 15 minutes earlier. Bequia wasn't behind for long, they had gone in close to shore to reef and got caught in a counter current, going backwards for a while. Our lead was very short lived as she shot right past us once they got their sails sorted out. 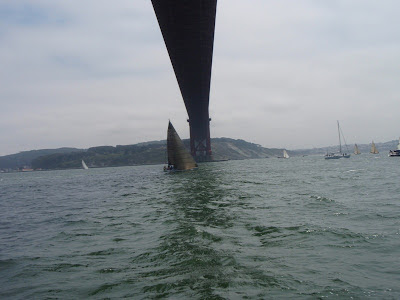 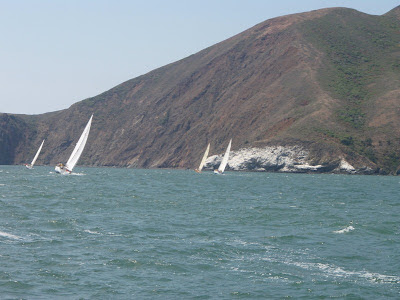 I made a very concerted effort to enjoy this moment. I was sailing out of the Gate and heading to Hawaii. I was the first on the rail to hike, something that has absolutely no effect on a 47 thousand pound boat but does afford the most spectacular views. Phil soon joined me and our first exchange of the race: "we're sailing to Hawaii!!!" High five. Corny, yes -- but you'd do the same thing. 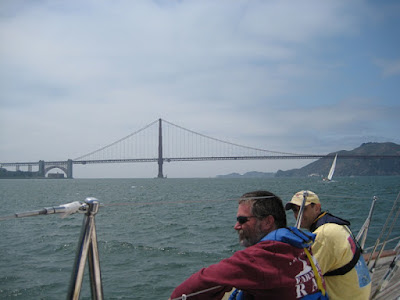 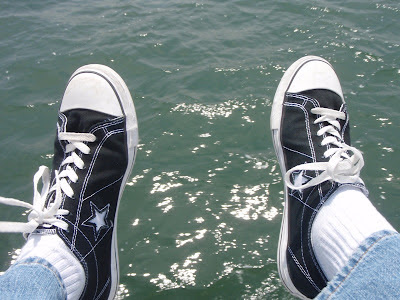 Once past Point Bonita, things got on schedule. Garrett and I had the 3-6P shift and we hurtled out to the Farallones. We were close-hauled, no wait, let me restate that, we were pinching our asses off to keep North of West. On the way out to the Farallones, we saw what I was hoping was the first of many dolphins. We had about five of them swimming along with us just saturating the boat with good luck. I sure felt better after seeing them.

Through the evening we were in between Bequia and Horizon Hunter, keeping about 12 of the 16 boats in view all the way to the Farallones. Once we were out there, we saw a few crab pots and the spout of one whale but not the whale itself. These were overshadowed by the fact that we were in the middle of the shipping lanes and had to keep track of all the traffic. One boat sounded a bit stressed out, "how many of you are there?!?" About 5 minutes after telling him that there were 16, Vessel Traffic got on the line and reminded everyone that in the shipping lanes, Commercial Traffic had right of way. Since, you know, we really wanted to be in their way.

I went off watch at 6, we had minestrone soup and I found a good place on deck to keep enjoying the experience.

It was at this point that the Magic Eye made its first appearance when Phil and Charlie came on watch. We were pinching to 30 degrees of apparent wind angle. Any time somebody tried to heat it up a bit to get some boat speed, you'd hear "keep it high, 30 degrees" from down at the nav station. The person at the helm would just be terrified to touch the wheel lest it move from 30 degrees. Turns out that Garrett has every single instrument duplicated down below at the nav station and he'd found his place, sitting in his "office" monitoring everything everyone was doing (and downloading weather reports it turns out). 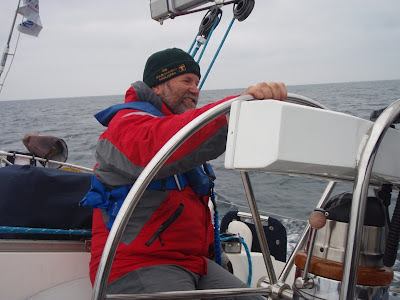 By the end of the day, I went below to grab 3 hours sleep before my first night watch.

Next up, Day 2: The Day of Seasickness.

The game face in picture #1 is priceless.

The shoe pic says it all - "We are Professional Grade".

Saving the serious socks for the Big Water, I guess.

I bet those shoes STANK after that trip.

Lonnie, I went to seaboots soon after, took a brief sojourn with the shoes and was shoeless for the majority of the trip. I smelled much worse than the shoes.

Sandi is convinced the journal is "romantic".