We were busy little beavers before our start. We got up at 7AM to do some final rigging on the boat, prepare this and that, have a last chance to back out, and finally around 11AM, leave the slip. When I was coming back from the showers, a nice gentleman on a gigantic powerboat asked us what time our start was and when we were leaving. When I told him, he said, "good, I'm on duty today" pointing to his Coast Guard Auxiliary banner, "I'll escort you out." So we took off with an official CG Escort, lights flashing and authority beaming through every port. 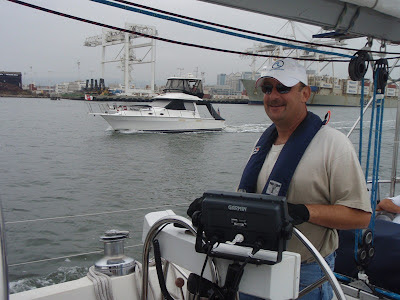 We got to the start very early, milled around, took a few passes by the StFYC for photo opps, and generally got a feel for the boat. About 30 minutes before our start (15 before Div B), I was at the helm and a fishing boat was heading right for me, I successfully avoided him but quickly realized that he was going to our starting line. Hell, I could sail faster than that rig blindfolded. He took a few lazy loops around, then suddenly started throwing a net in the water, a guy jumped in a RIB and towed the net in a huge circle right at our start line! These guys were engaged in commercial fishing, they had Right of Way! If I was some Hollywood hack, you'd accuse me of foreshadowing right now, but I swear it happened. 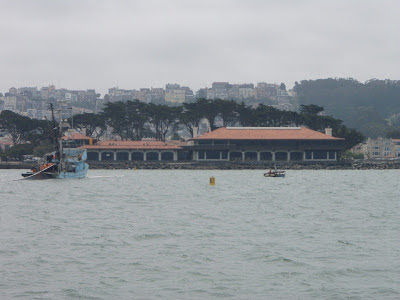 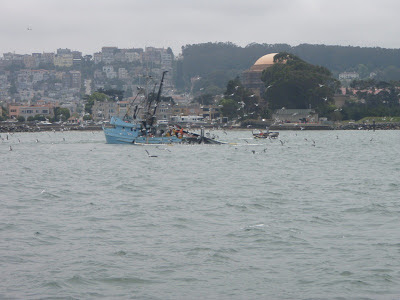 They finally cleared out just before Div B got started, we raised our sails right about then and started getting ready of our start. We did a quick assessment of the competition and realized that a few of the crews were wearing matching foulies...we thought we were the big heavy cruising boat division, we thought wrong, these guys were serious. Our outfits didn't match. 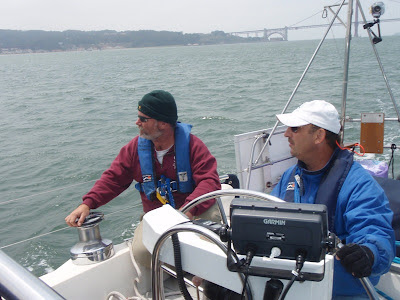 In fact, they didn't even look particularly good. We made ourselves feel better by making fun of them and telling ourselves there was plenty of time to wear foulies in the coming days.

Our strategy was to be in the second wave of the start, figuring that 15 seconds doesn't really matter in a 2 week race, Ada Helen thought the same way but the other six boats were racing like it was the finish, not the start, line. They all wanted the boat end, and two boats (Rabian and some other that I never saw the name) were squeezed off past the pin and had to circle back to start. Cool, we were ahead of two boats at the start.

Next up, the Day 1: We Leave for Hawaii.

What was the temp out when you started. I heard it was cold in SF in the summer, but tit seems downright chilly there.

Hard to believe it's that cold when it's in the high 80s and 90s here every day!