Day 11: The Fishing Derby Must End

The Fishing Derby isn't even fair any more. At twilight on Day 10, right after my watch, Phil & Charlie caught another Dorado. The fish apparently did not understand that she was just up for a Kodak moment and fought her heart out, slipped the hook and was live on deck! Phil wrestled her down, picked her up for a photo and tossed her back into the ocean. Then in the morning, we hooked fish number six...the sixth straight femail dorado. Again, picture time and release. 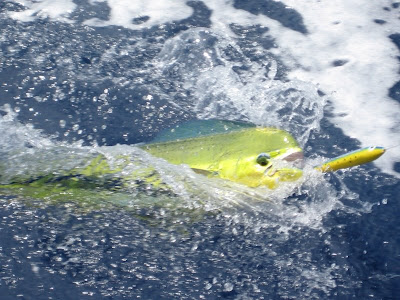 Tired of the little guys, Phil brought out the secret weapon: Rainbow Warrior, a multi-colored yellowish orangish squid. Time to bring in the big fish that we can eat. 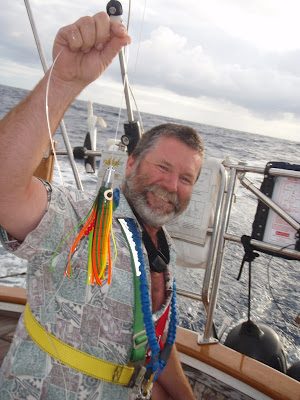 We kind of saw another sailboat on watch last night; Darren reported seeing it and claimed he saw it on "radar". A few times my eyes even tricked me into thinking I saw it but I didn't really. There are many phantom boats out there when your night vision is killed by sailing by instrument. If it were really a boat, it'd probably be Urban Renewal but who knows.

Fish on! I came running up. Ah man, fish off. Phil said we lost it as he pulled in the empty lure. Charlie looked at him cross-eyed and said, "wasn't it on the other lure?" Alright, "fish on again!" Lucky Number Seven, our first male dorado. This guy put up a fight, escaping once, biting Phil and generally make a nuisance of himself. Fish for dinner tonight! And we caught him with the Rainbow Warrior. 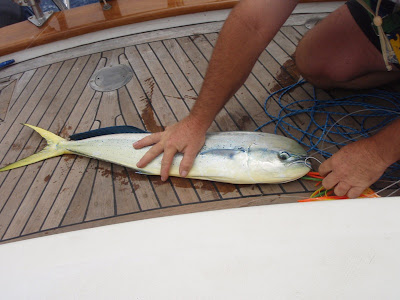 After the fish struggle, I looked on the patio and saw this tiny little flying fish; I picked it up and noticed that it was kind of dry and had been dead for a while. It hadn't been there earlier so the only possible explanation that Lucky Number Seven spit him up during the struggle! Since we officially "caught" this fish, I'm counting him as 0.1 in the Derby. 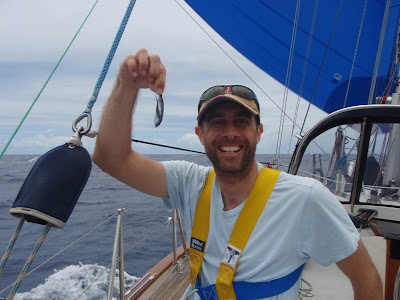 I steered us into a squall in the early morning, handling everything pretty well until a 30 knot gust hit, the boat started to heat up and everyone started yelling "bring it down!" while, of course, I had already been doing just that. I talked to Charlie a bit about how frustrating it is that the second the boat goes off course everyone starts critiquing and he very helpfully gave me some tips on how to catch the boat's tendency to round up earlier, conceding that it may have been difficult with that first gust. It's pretty humbling to be the fifth best driver out of the five drivers but I need to keep an open mind that I'm learning from some darned fine sailors. At this point, I'm like that middle reliever who eats up innings, takes long watches but gives the ball to a specialist when that left handed power hitter/heavy squall comes up. 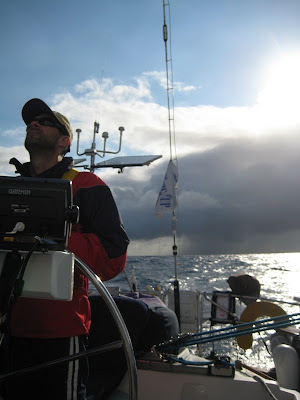 By the end of the day, I'd come to terms with it, deciding that if I wanted a reef, no need for self doubt, just ask for it. On my late night watch, I talked to Garrett about it too; he was pretty encouraging...I did about an hour and a half of pitch black DDW steering and came through it OK, on course maybe most of the time. 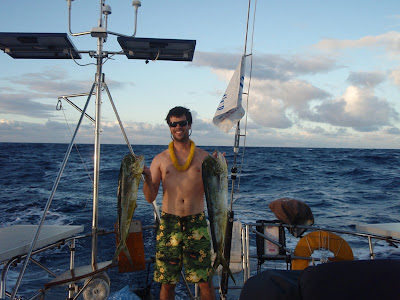 We did have some good news in the early evening (interesting side note, fish always bite at dawn or dusk), we caught TWO MORE FISH. I affectionately named them Magic 8 Ball and Ice Nine (bonus points for knowing what Ice Nine is). Darren saw the first, Lissa saw the second and I had the presence of mind to yell "Fish On Fish On". If nothing else, I got better at my fish-catching-yells.

good to see a Vonnegut reference

An ice-boat run from SF to HI would be a lot faster, but there'd be a lot less fish...