This was our first night of The Squalls. I came up on deck for my 6A to 9A watch, asked Darren how it was and saw a scary scary excitement in his eyes. He exclaimed, "we rode the dragon!". Now, we'd been at sea for ten days at this point, I think I knew these people but 10 days of salt air can turn someone. I backed away slowly not having a lot of places to run and hide (in the back of my mind, "can I get to that winch handle before him?!?). 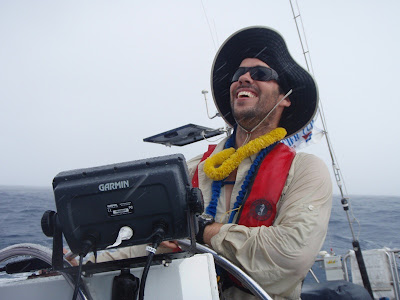 Note: not actual picture of crazed look but a later example of Darren riding a squall

Sensing my apprehension, or just because it was interesting, he pointed at the radar and said, "yeah we had a squall last night shaped just like a dragon. We hunted it and rode the dragon!". OK, that made sense but I noted to keep him off sugar before the squally watches.

My watch was either more or less interesting, depending if you like fun sailing or carnage. We had the tail end of the squalls with their shifty funky weather. No huge wind but I got a 90 degree shift right before a small squall...the boat rounded up (passive tense even though I must have had some hand in it). I got the boat under control, sailing again....ummm, not exactly, what the hell is wrong with the starboard pole? Phil came running up (he might be superhuman, I'll have to do some DNA testing), looked up there, and panicked. Or at least yelled, "holy crap!". He ran onto the foredeck, got the pole controlled before it hit water (Garrett said our tight sheeting saved the pole from hitting the water, I was still confused as to what the hell happened), pulled it off the sheet, put it on deck, and then calmly started giving me instructions. 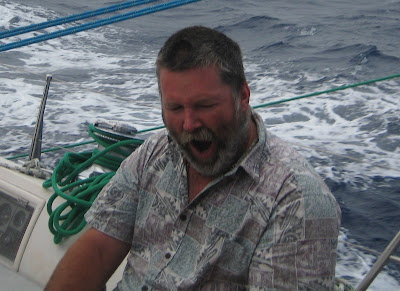 He had me steer to a close-hauled course (I was too flustered to not follow instructions that I didn't understand), the starboard butterfly backwinded and got plastered to the leeward butterfly basically making a jib. He rigged a new topping lift (the old one had blown up), got the pole back on the sheet, had me steer my course again, and we were sailing.

At this point, I thought that my roundup had brought down the pole but it turns out that a splice had just frayed loose. In retrospect, it was a pretty bad splice, but I'm still pretty convinced that my roundup was the final straw. Note: this was my only "actual" roundup of the trip, I came close a few times but always got it under control.

Phil and Garrett were discussing the near catastrophe (if the pole had hit the water, it could have brought down the rig or at best broken the pole) and Phil said, "if it's gonna break, it's happening out here boss, not at the marina". Holy crap, for 10 days he's been calling Garrett "Boss" and it took me until now to figure out he's been delivering Cap'n Ron lines the whole time. Yes, I am a product of America's Public School System.

But even educationally-challenged folk can learn something. Lissa was commenting on the jellyfish with little blue sails on them (Vellela Vellela or by the wind sailors); it turns out they're everywhere out here but mostly invisible. Phil dropped some knowledge about them: they're born either on starboard or port tack and can only sail around in one direction. I guess it's like dressing left or dressing right. But more nautical.

I had a pretty zen moment during my afternoon watch (must have been 3 to 6). I had caught up on sleep in the morning, had meatloaf for lunch and drove for the end of Darren's watch and mine. Hand steering felt good, we were sailing very close to DDW and Otto just wasn't having it. I realized I couldn't trust the instruments and the masthead windo was all over the place with all of the rocking so the only way to sail to the wind was to feel it. I had to stare straight ahead and feel the wind on my arms, neck and ears. If I felt the wind on both ears, I was screwed. So I stood still, rocked with the boat, stared straight ahead and steered an almost straight line. We had Marley playing, a warm breeze and 4 or so hours of hand steering. Very nice. 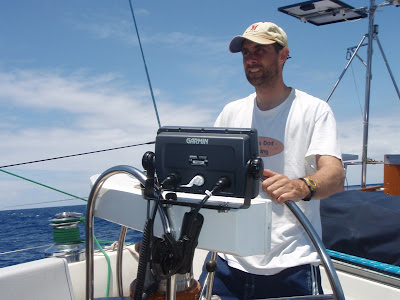 Early evening excitement. We caught another Mahi Mahi! It was a bit small so we threw it back. Unfortunately it was kind of gross, the fish got hooked in the eye socket not in its mouth...I nicknamed it Cap'n Ron. It'll be alright though...until a predator comes up from port. Sorry about that, poor thing. 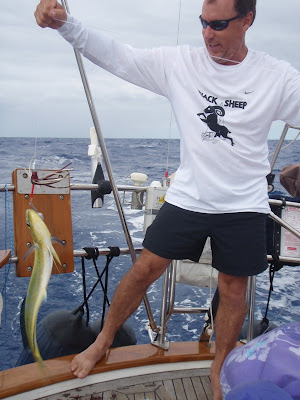 This was the day I started getting conflicting emotions. I was really missing my family and wanted to see them but I didn't really want the trip to end. Luckily, there was nothing I could do either way but sail the boat. 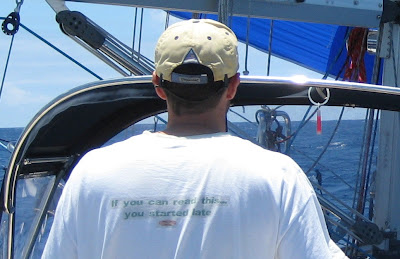 Next up: Day 11: The Fishing Derby Must End.

Ya know, life is life that, sometimes all you can do is just "sail the boat"