I am "so set" to go up the mast. I've done everything but go up.

I brought all the gear down to the boat, organized it, hoisted the self-climber and got to work. 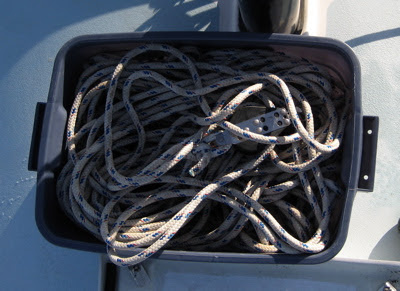 I hoisted the self climber and started fiddling with the ratcheting block; Chris had warned me that it was tricky. Hmmm, it all made sense. So I tried to see how it would hold under load. Beautifully it turned out. Then I tried to bring it down while under load. Uh-oh, problem. It worked too well, I couldn't figure out how I'd ever get myself down. Even having the tail led down to a block on deck and pulling myself I think it would hold.

So the project is on hold until either Chris gives me a tutorial on the self-climber and assurances that I can call him and have him bring me down if it fails or I just get someone to hoist me and drink coffee while I work.

At least I'm staged and all the gear is organized and waiting for the big hoist.

Have a safe, productive, and enjoyable climb, Edward!