Zen and the Art of Photography

A lot happened Saturday. There were highs and lows, excitement and boredom, grins and giggles. But there was one event that just made me smile.

Zen had been threatening to come out and take pictures of our launch and start. But as the weather forecast worsened, I expected it less and less. Then Friday night, I got a note that he was going to bail. It's one thing to sail in crappy weather, another one entirely to sit on shore and endure it.

Saturday morning dawned to clear skies and frigid temperatures and I excitedly left the house 30 minutes earlier than expected. I got to the boat, started getting her ready, Kathy showed up and about 10 minutes later we were ready to go. Right before launch, Kathy was getting her foulies on (since we still expected big weather) when I saw somebody's legs walking down the dock. I didn't expect anyone so when I popped out of the companionway and saw Zen, it just made my day. 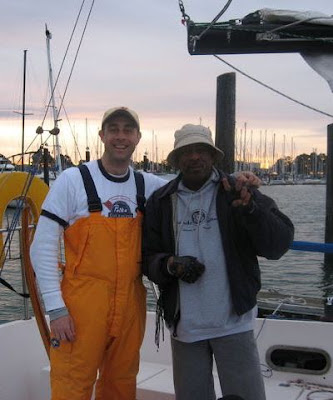 What a great surprise and great way to start the day. I already feel like I know the guy from blogging and email exchanges but this was just fantastic to meet him. Zen introduced Lady Zen, I introduced Kathy and we had a very nice, though too short, chat before we had to shove off. 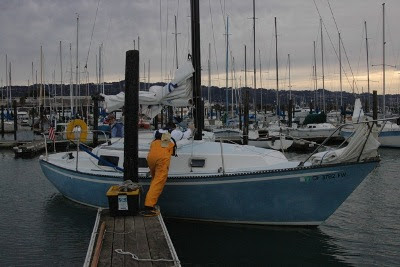 A lot more happened Saturday but meeting Zen, having him photograph not only our departure but the start of our race, just gave the day a very special start.

Hmmm. Why are the foulies hiding part of the Polka Dot Racing logo? Is this a Tool Time/ Wilson inside joke?

God, I love the color of your boat. Just beautiful.

I'm delighted it all worked out. Now I'm landlocked in Nashville for the next week!