Once we had left Zen, we started motoring off to San Francisco. With some annoying chop on the beam, we decided to raise the main and motorsail to stabilize a bit. Uh-oh, I reflexively looked up at the masthead to check the wind and bam, no windex. What the? I must have lost it during the storm last week and just hadn't noticed. Worse yet, while raising the main, the halyard seemed to be sticking before I could get the main all the way up. After lowering and raising a few times we were able to get it unstuck and raised all the way. But still, no windex really sucks.

We made it to the City with no more problems, killed the engine and paced the line a few times under main alone, being careful not to cross the line since there were starts coming up for the "even slower boats". Once we got a sense of what was going on, we raised the jib and started getting tactical. Tactical = staying alive in the crowds. 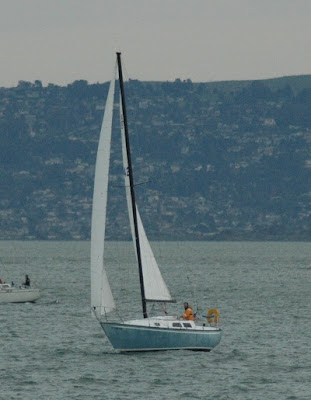 Finally, our scheduled start of 9:53:06 drew near, we zoomed about 3 minutes past the line, ducked down into the start zone, and made our way back. But it turns out the closer you got to land, the less wind you had. I hadn't actually checked that before. Whoops, but still only about 60 seconds late to the starting line is better than what I usually do. 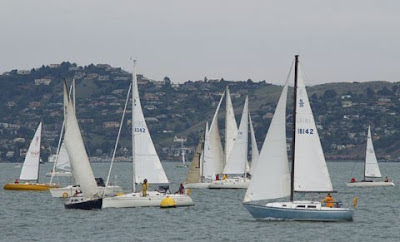 Without the windex, I was using my ears to determine wind angle so we probably didn't have the best trim heading down to Blackaller but we were even with the boats in our start so I couldn't complain. I wimped out and went outside of two boats as we rounded the mark...probably good because those two came very close to a collision.

Now the fun part, a tight reach up through the mass of hundreds of boats that were about to start. We were on starboard and did the "driving in Italy" routine. Just close your eyes and count on your right-of-way. We were trucking at about 6-7 knots on starboard through a gaggle of port-tack boats. Is there anything better?

Kathy was down on the low side spotting boats for us. She asked what to do if we were on a collision course. I said, "yell Starboard really loudly". In my mind we had the "Invisible Bubble of Starboard Righteousness", we could do no wrong. I have never really experienced what we did there. Absolutely full speed for my boat through an absolutely swarming mass of boats all of whom had to get out of our way. It was like I was parting the red sea.

We were off to Treasure Island.....