I'm probably taking Lady Bug out by myself this weekend. It's winter, the winds are moderate and everyone is busy preparing for the Holidays. So, off I will go, sailing around in circles on the Berkeley Circle by myself.

That brings me to Francois Joyon (or is it Francis?). He's singlehanding his boat. His boat floats. He will be on the water this weekend. His boat has sails. As far as I can tell that concludes the similarities between the two of us, our boats, and our weekend plans.

Here's what I mean: 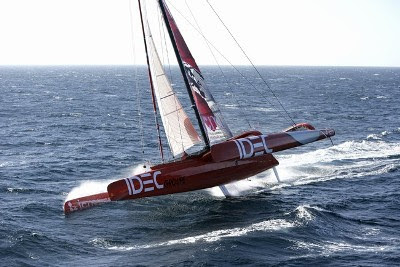 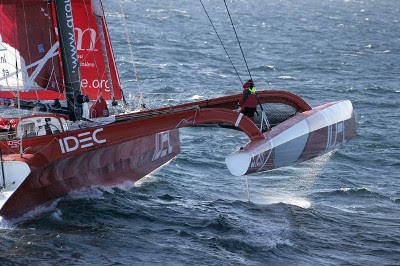 There are differences. Not much. But there are diffences. Let me list them.
There must be more. I sure as hell am rooting for him, what a cool ride and it's mighty impressive the speeds he's keeping up. His website is in French but there is a thread on Sailing Anarchy with someone translating it. Disclaimer: I haven't read the whole thing so I have no idea if there is anything inappropriate on it.

The French and their trimarans are, shall we say, magnifique.

Have you checked out the youtube trimaran stuff? Check this out:

(if you've already seen it I apologize). Fantastic!

Sailracer, they do have that je ne sais quois don't they?

My Dad is an admitted anglophile and has apparently hated the French dating back to Trafalgar; his opinion is that the French make such good solo sailors because nobody else wants to sail with them.

Your Dad is probably right. That's why I'm such an awesome single-handed sailor too.

And never mind Trafalgar. What about Hastings.

Tillerman said...
This comment has been removed by the author.
2:09 PM

hahaha! Well, I must say that I was a bit weary on them until I spent time in St. Tropez this summer. The French are something else.

And, as a Madame Roux Chatiers First owner, I do love their boats!