On Sunday, I had a new crewmate, the father of one of Camille's school friends. We will call him S. until he consents to his name being used on these pages. We had a great sail, it was his daughter's first time on a sailboat and she took to it beautifully. But, then again, it's in her blood. S. is Swedish and grew up sailing as Scandinavian law requires. They just can't get anywhere interesting unless they take to the sea.

We were discussing new crew rituals...the first time he'd ever raced he'd been forced to drink a decade old can of Schlitz beer. I've never had that on my boats, being more of a "dry" boat with pretensions of "kindliness and gentility". But looking through the pictures I took on Sunday, I realized that I do force something on the crew that isn't quite a ritual but still somewhat odd. 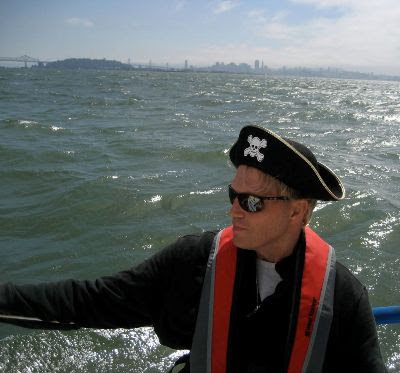 I seem to have a weird pirate thing going. See Tim's first sail, Marcus' shanghai'ing, my own infant son, and of course my favorite self portrait ever.

Aaarrrrhh, matey, we be pirates at heart.

Aaarh, yet wot we did this weekend was consort with Buccaneers, and na true pirates. Luckily we had plunder to share with 'em and they sailed away peaceable-like.