Obake to my Left

"That's the kind of boat that you'd read about in a Stephen King novel." "If there were such a thing as a haunted boat, this would be the one." Two friends were standing on the dock looking curiously at a complete disaster of a boat - a once proud sloop named Obake.

The rumors around the dock were that a man had illegally lived aboard a few years ago. He shut the boat up tight so that the marina staff wouldn't know he was living there. All the ports were shut tight and covered. He apparently had a way to lock it from inside. From outside, you would never know that he was on board. The old-timers say that because of the must you would smell him before you saw him. About three years ago, the smell and the sightings stopped.

Peter had moved his boat to Berkeley about a year ago and was pleasantly surprised to find a prime upwind slip available right by the sailing school. There was usually an eighteen to twenty-four month wait for upwind 30' slips. Score! He pulled his boat in on a beautiful Spring day and was entranced by the oceangoing cutter to starboard of his slip. What a beauty: well-cared for, varnished teak, new running rigging...he was in his element - in the company of beautiful boats.

It took a few weeks for Peter to notice the disparity of his port and starboard neighbors. The boat on port was hideous, with shredded running rigging flying in the breeze, rotted wood, holes in the deck, and no boom. This thing would never sail. Soon he started hearing the stories about the Musty Liveaboard. When he asked how people could stand to have their boats next to him....all he got were concerned looks and variations on how people didn't stay in that slip for long. It didn't bother him, the guy wasn't there any more; the boat was an eyesore but at least it didn't smell. 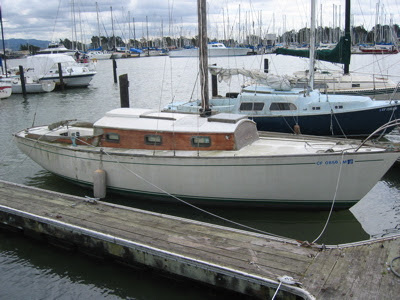 Until last week. The musty smell was back. And now Peter and his friend were standing looking at a closed-up boat wondering what the hell was going on.

There was only one way to find out and it violated every maritime and supernatural protocol that Peter could think of....they had to climb aboard. The companion way hatchboards were rotted through, it wasn't too hard to push open the hatchway and peer in. They had the phone pre-dialled to 911, both expecting to find dead bodies (or worse) aboard. But all they saw was a complete mess, about a foot of water above the floorboards, rotted cushions, old beer cans, and the smell. 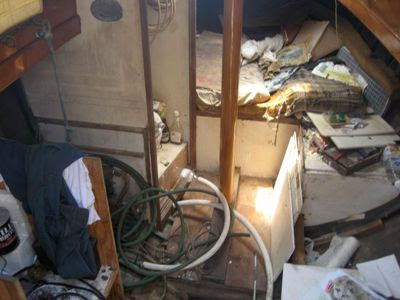 Oh dear, the smell. Mildew was rampant, there was mold pouring out of old food containers but no dead bodies. Without leaving the cockpit, they looked through the boat and discussed whether there was any value at all in this boat. Even the surprisingly fresh battery and 2-stroke diesel wouldn't cover the cost of disposing of the rest of the boat. 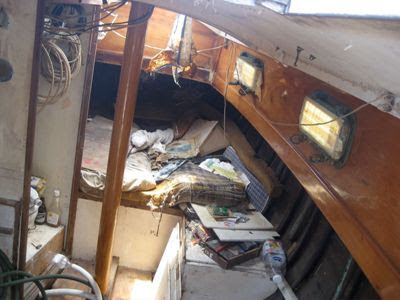 They snapped some pictures and hopped back on the dock. It was time for Peter and his friend's weekly sail, they rigged up their boat, fired up the inboard and set sail.

This was all I could figure out from the logbook that I found in my new slip's dockbox. Imagine my surprise when I found out that a prime 30' upwind slip had suddenly become available; I had jumped all over the opportunity and signed up on the spot.

After reading these odd entries in the log and looking over at the abandoned hulk to my left, I'm hoping to find out that it's a different boat when I go on board to check it out. Wish me luck.

There's a log book on your dock for it slip?

Staying in character here...Peter must have left it there when he went out for his "final sail".