The Obake boarding was deemed necessary due to excessive boredom while waiting (almost literally) for paint to dry. I would say that we had to do something but for the most part, during those two hours of waiting, stuff just happened.

When we went sailing earlier in the day, it was blowing about 15, but by early afternoon, it had picked up to 20 or so. We had been watching a Merit 25 practicing maneuvers within the marina for a while; I guess they wanted to get the medium air practice in without the medium-air chop in the Circle. For the most part they were staying away from other boats.

Until a Pearson Commander from the Cal Sailing Club (CSC) appeared. The Merit decided that it was time to take on another boat and tack out of the marina (leaving the marina is invariably upwind in the Summer). What made this unusual is that it was "free rides" day at CSC when one experienced skipper takes a club boat out dangerously full of novices. This particular crowd of novices was a gaggle of screaming teenage girls. So we heard them before we saw them.

They had decided to cross tacks with the Merit all the way out of the marina. Each cross, the Merit would duck under their transom as close as they could (for practice I assume). Then, a Catalina 37 decided to get in the mix motoring straight up the middle of the channel. The Merit would come flying up, stall briefly to let the Catalina through, the CSC boat would fly in seemingly out of control teenagers screaming, tack at the last second, have the Merit pass them, teenagers screaming, cross tacks again and repeat as necessary.

Here's a crude drawing of the situation. 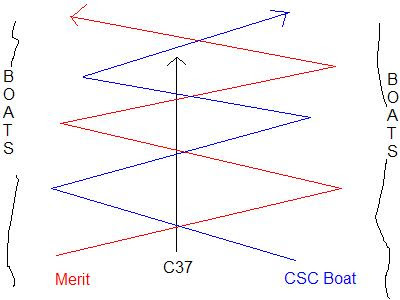 You would think we were at a fireworks show with our reaction at each three-boat-crossing in the middle..."ooh ahhh" "wow" "did you see that one". I was leaning hard trying to influence the boats to make the crossing or ducking or tack in time. Yelling "head up" "starboard" "aaaiiieeeeeaaaaaiiiieaaaahhhh" "eek". It was one of the best sailing spectator moments I've ever had.

Amazingly, in 20 knots of wind, we could hear the teenagers screaming as they almost collided every time. The Merit was ruthless, crossing close and in control every time. The CSC boat must have had one hell of a driver to not hit anyone with that crew on board. It was incredible. And, at the same time, just another day at the marina.

Let's see, there's a bigger boat motoring up the middle of the channel, and it's expecting these sailing boats to get out of its way?