Round the World in an 8 Foot Boat

Have you ever driven by an accident on the freeway and just couldn't help yourself? You looked even though you knew it was a bad idea? That's the fascination I've developed for this guy and his boat: 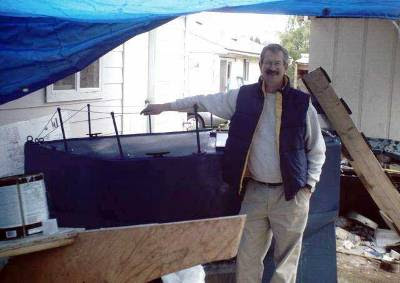 His name is Harley and the boat is named Seabiscuit. He's attempting to break the record for smallest boat sailed nonstop around the world. I think the fact that it's solo is kind of understood. I applaud people who do things like this and think that spirit of adventure is what makes the world a great place. But take a look at this boat: 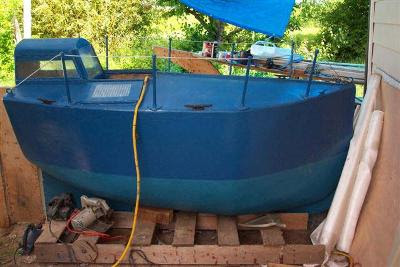 A very well known designer, Bob Perry, likened the design to a marble (a shape not known for its seaworthiness) on the Sailing Anarchy forums. The rudder is held on with door hinges. The mast is foam, a plywood box, more foam and quarter molding (like what you decorate a room with) surrounded by a carbon layer. The boat is heat-absorbing blue (though in fairness the mast acts as ventilation). He has lifelines for those long walks on deck. Then again, I've never designed a boat to go around the world nonstop so there must be a reason for those cleats.

The real challenge, and this isn't just his challenge but all small-boat adventurers, is what to eat for approximately 400 days. This is where it gets weird, Harley is planning on "A years supply of some food tablets with me that are supposed to be enough to live on all by themselves. I am also bringing survival foods designed for use in lifeboats, which are also supposed to be enough to survive on all by themselves. This I will supplement with a plankton net which when I'm in the right areas will allow a very nourishing tablespoon of really yucky, hard to swallow goosh, a combination of both plant and animal life that is incredibly nourishing. I am also bringing a single-burner propane stove for very occasional use. A 25-lb. bag of Basmati rice. Some flour for making hard tack (the traditional "Sea Biscuit" made simply of flour and seawater.) which I have developed into a technique, using a Norwegian Krumkake Iron, which allows me to make a thin 6-inch wide cracker in about 60 seconds. Throw in some legumes for making fresh sprouts as Sir Francis Chichester did, 400 single serving tubs of peanut butter that can fill in any unused space in my storage, a tablespoon of oil added to the preceding adds 500 calories daily to my diet. I am also bringing dried meats, and dried fruits. I have very carefully measured the nutritional value versus the bulk of all my foods and found that I can, but not so easily, carry enough to last me a year."

His exercise is going to be "pumping his desalinator" for an hour a day. You can't make this stuff up folks.

You can follow this strange voyage's progress at Duckworks Magazine...he posts in the forum at the bottom of that page every once in a while to let people know he's still going. But he's keeping his actual start date a secret to keep the Coast Guard from stopping him with some restriction like "manifestly unsafe" craft or something like that.

He maintains that if he goes down he doesn't want to be rescued. Here's a wish that he makes it and we get to read the account of this voyage from his own pen in a year's time.

Is that boat supposed to sail??? It can't be any worse than Dom Mee's attempt to cross the Atlantic on a kite-powered boat. At least this guy doesn't plan to go pleading to the Coast Guard for a rescue when things go south...like Mee did after getting hit with the remnants of four named storms.

The world "knucklehead" comes to mind as I look at these photos yet again in disbelief...

Different strokes...
but I hope test voyages are planned. I guess the blue color is camouflage to make sure he doesn't get rescued ... but it does rather increase the probability of a fast-moving ship never seeing the boat until it's too late...

Out of his fucking mind. At least use some marine hardware....door hinges for rudder pintels and gudgeons? Hopefully he won't be skipped by the next revision of the Darwin Awards book.

The guy is a bloddy nutcase! He shouldn't be let lose with a screwdiver let alone a boat!

I guess he really wants to die. It's an unusual coffin, but what the hey, go for it mate. When you go down make sure to leave the hatches open for the fish.

wow looking at all the comments makes me laugh I built my own boat and had people tell this will never work it now hits the gulf 3 times a week or more. so this guy making it is a great possibilty nay says all sit at home in your AC and watch the go getters rule the world