Camera phones are everywhere nowadays. They annoy Tiger Woods, they capture celebrities in compromising positions, they get blurry pictures of kids doing funny things. But, mercifully, on Sunday nobody had theirs with them.

See, I did two things nautical on Sunday, neither of which should be recorded. First, I took my cousin's dinghy out for a sail in his canal: 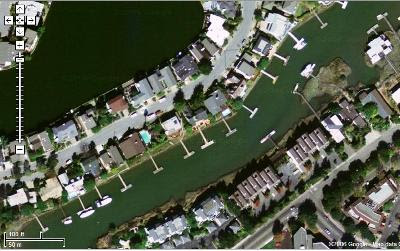 The problem being, this canal has fluky winds, the tidal current was flooding against what prevailing wind there was, and his dinghy is a rowboat with a sailing rig. So to make headway upwind, I had to paddle while being bashed with the boom for a few brief moments of downwind fun. It was not only uncomfortable and unsatisfying but greatly reduced the family's image of me as a real sailor.

Then, we took his crazy fish-catching 40-knot monster boat out for a quick ride. 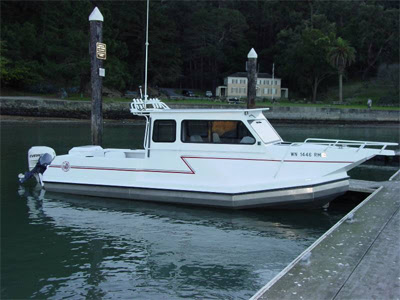 For Christmas, I had bought him one of those yachting caps (white with a shiny black brim and gold filigree all over). Since I was on the boat, I insisted that anyone piloting had to wear it. Of course, I ended up driving for a while with the hat on and that's where the forgotten camera situation really paid off. There are only 4 witnesses that this ever happened and I can control the ones that are under ten with spare change. And of course, my tens of readers who now know about it but you guys never know what to believe of my writing.

As one of the ten, I must say that any guy who posts a picture of himself wearing a pirate hat and says he was banged in the head by a boom must be believed.

Should we have any reason to doubt you?

We would expect nothing less!