I got some work done on Clover today but will write more on that later (just keeping it sailing-related).

In the meantime, I'd like to wish everyone a Happy Fourth of July. If you're from a non-USA background, happy whatever caused your independence day and may it involve fireworks. Unless you're in some still oppressed country with a real revolution going on but then you probably don't have the time to read the drivel that fills up this blog.

My eldest made a 4th of July poster today while I painted Clover: 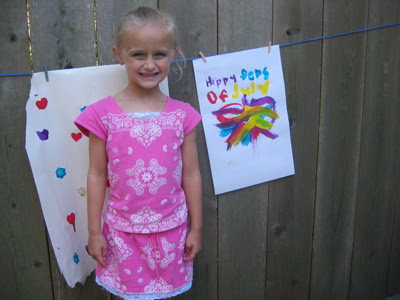 I then forced her to pose as a pissed-off American who 230 years later hasn't gotten over her anger at the British ( that means you Tillerman! ): 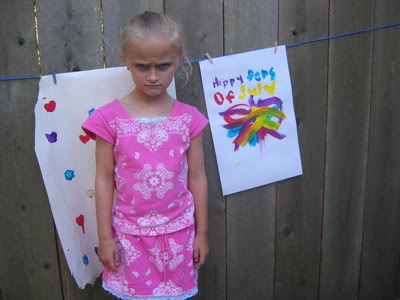 In truth we're just fans of the angry portrait, but believing that she's angry at a country whose biggest sin in her world is that Pepito the bad hat had to move there and leave Madeline back in Paris is just plain funny to me.

And in case you don't get modern art, those are fireworks in her painting.

Did I mention that we British call today Thanksgiving?

a born actor, such feeling, such drama, sign her up