When it came time for the Pac Cup inspection, we had already signed the certification that we had performed the obligatory MOB practice onboard Valis.  The Inspector asked the simple question, "has the crew done the practice?"  Paul answered, "yes".  The Inspector pressed on, "this crew?"  Paul, "Umm, no."  Inspector, "no problem, just do the practice and send in the certification form."  Paul, "sure, we'll do that."

Lacking the ability to lie, we all decided we'd best do the MOB practice and the Emergency Rudder test.  This weekend was perfect for it, blowing 20-30 knots in the slot, exactly the conditions that people, hats and cushions go overboard in real life.  We left Sausalito with me on the helm, searching for a good spot.  I cruised over to Alcatraz, gybed onto port, wove our way through some racing fleet or another, with top sustained wind in the low 30s, the boat handling like a dream.

Every once in a while, I'd count to make sure we still had four crew on board.  You know, in case somebody decided to test me right there and then.  But, thankfully, nobody on the crew is that stupid or clumsy.  So we kept searching.

Finally, as we started into the lee of Angel Island, the wind moderated down to 20, then 15, then 10.  And we were set.  We have a lot of thinkers and theoreticians aboard Valis so we got right down to business.  The business of discussing what we were about to do as I sailed aimlessly around Southampton, avoiding other less serious more leisurely sailors.  We discussed the ins and outs of MOB theory and research.  We discussed Valis' particular handling characteristics in such situations.  We messed with the nav display to figure the appropriate button to push for MOBs.  And we annoyed the heck out of John.

After about 15 minutes, he said "f*** it, man overboard" and threw the hapless cushion to the dangerous seas.  Ah, hell, I was the poor schmuck at the helm, I had to do this.  So, I beam reached, tacked, broad reached, and tacked up to our cushion and came within about 2 inches of the pole being able to reach our victim.  Instead of doing the whole figure 8 again, I just went ahead and did the bottom half of the 8, pulled up alongside of the cushion and David brought him onboard.  We had saved the cushion.

High fives all around, discussion on what would have happened in real conditions with a real person, more fussing with the nav display, and John had had it again.  He took the cushion and threw it overboard again.  He hates that damned cushion apparently (a good thing to know since I'm about to spend 2 weeks at sea with the guy).  This time, I hit the button, and said, "I'm not doing that again, you take the darned wheel" and handed all but pointing responsibility over to the man who hates the cushion (John for those of you not paying attention). 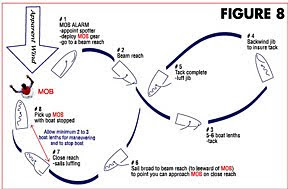 He executed a beautiful figure 8, came up upon our victim with flawless precision and promptly ran him over as David fished him out from underneath the boat.  We had done it twice!  That is downright certifiable.  We learned a lot about the crew, the boat, and our seamanship.  The only thing I don't know is what the cushion did to John to deserve this treatment.

How would the drill have been different if you had been trying to pull a real, possibly unconscious, person out of the water?

Dangerous no doubt. But these guys had it really cushy.

And they didn't have to put up with the "associate staff" at the sailing school in Santa Barbara.

Tillerman, we actually discussed the differences between a cushion/boathook recovery, and an actual MOB. We've got the regulation "halyard that reaches the water" (actually, several), so if the victim is conscious it shouldn't be impossible. Unconscious, we might have to resort to inflating the dinghy, or using the stern ladder (conditions permitting), etc. Bottom line, stay tethered and don't fall off the boat.

After finishing MOB practice, we were monitoring the VHF and listening to the USCG and two pleasure boats trying to rescue four (!) kayakers from the water near McCovey Cove. Theories abounded.

Have you ever noticed the irony in the fact that cushions never fall overboard yet we spend all of our time practicing their rescue?

Thanks Paul. I asked because my son and I did a bareboat cruising preparation course a few years ago and we did the usual MOB drills with cushions or something similar. I had no difficulty sailing the boat back to the cushion, but I was left with an uncomfortable feeling that if it were my son in the water (or me) and especially if the person in the water was unable to help, the hardest part would have been getting the MOB back OB. Do people practice that part with a real M?

I'm also thinking that I need to learn wet rescues for kayaking if I do any more of that.

Quite a bit of in-the-water research has been done into retrieving actual people right here in SF Bay.

West Marine and others have sponsored this, with a number of recovery techniques evaluated using divers in survival suits and various keelboats and recovery rigs.

Most of the results pointed to the Lifesling plus some other lifting tackle as the best means for a short-handed crew to get someone back on the boat.

But they also emphasized that no rig was much good unless the crew had drilled in its use.

So have you drilled it? Anybody?

Tillerman: So have you drilled it? Anybody?

That means someone going in the water. And getting wet. And cold.

Seriously, no, we haven't. This needs to be done very carefully, as these kind of drills sometimes go fatally wrong. We've got the lifesling, we've read the articles and seen the pretty pictures.

During my 2008 return passage, we knocked a strobe overboard in moderate seas. That's about as close as I've gotten to a real-world recovery drill.

One of our sailing instructors in Santa Barbara had tested a Lifesling when they first came out; he went overboard and pretended to be unconscious, and his 9-year-old daughter retrieved him with it.

Of course, this might have been a particularly resourceful 9-year-old, as she had been sailing since she was a toddler.

I was in a MOB drill with a cap one time.

The important thing was that it was a cap off of somebody else's boat. It was returned very publicly & with all proper ceremony back at the dock.