349 boats behind the Eight Ball 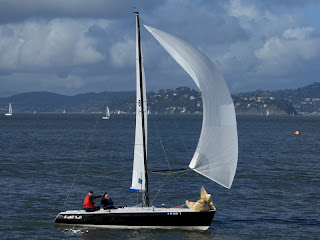 I really really like this article and thought it would be good to link to it here:  349 boats behind the Eight Ball.

I called Scott Easom, skipper of Eight Ball, this morning to discuss his win in the Three Bridge Fiasco and was amazed by the humility that he was showing for some incredibly good decisions.  He put a lot of them to luck but that doesn't explain why he keeps winning these races.  Of course it's a good idea to get out to the wind and into the favorable current before everyone else but how does he do it more consistently than the rest of the fleet.  I felt like a smarter sailor just by talking to him for 10 minutes.

Check out the bottom on Eight Ball in this Kimball Livingston article.  That thing is shiny and spotless.  I think that Scott was being modest even in discussing his boat prep and that was the only area where any pride even showed through.  That boat is ready to sail and sail fast.

He was the talk of Sailing Anarchy this morning and deserved to be...one hell of a race.

Is "check the spinnaker for mouse nest" on his prep list?

I know it's on mine now.

It's kind of like a "making of" that you find in the DVD. Next step, I'll do director's cuts of my Examiner posts.

Presumably the mouse was not treated as a regular crew member (in which case you would have been required by the racing rules of sailing to stop racing until recovering the mouse back on board), but was more like an non-sailing America's Cup "17th man" or photographer, who can be disposed of during the race.

Those Easoms know how to sail AND build. I learned to sail and race on a Dasher built in Sausalito by Hank Easom. We won a lot of races on that boat.