I crewed aboard Temerity for the Sarcoma Cup a few weeks ago. There is lots I can say about the race: how much fun it was, the average age of the crew, and the beastly amount of weather helm that Temerity has to name a few. But instead I'm going to talk about Little Alcatraz instead.

Little Alcatraz isn't Big Alcatraz' little brother, it's the buoy just west of the island that marks danger. And by danger I mean rocks. Big rocks just below the surface. The sailing instructions very clearly said, "keep that b@stard to starboard"; what they didn't say is, "keep that b@stard farther to starboard than you think you should since there's a freakin' 3+ knot current trying to make you run into that island and it might not take no for an answer".

I'll go chronologically to help this story along. As we approached Alcatraz, we did what most people did, tack into the island to get some current relief. Because of this, we couldn't see all of the boats (and there were a lot) that were ahead of us. We rounded the island, contending with 25 knot westerlies and the 3 knot current, expecting to see empty water ahead of us.

But the first thing I saw was a red boat dropping sail. What the hey-hey? The conditions sucked but weren't bad enough to drop out. Then David saw a Viper coming back towards us? Huh? Drew's dropping out? David pointed out a broken mast, aha, that's it. But then we saw the scariest thing...there was nobody on the boat, it was sailing back to SF without its crew! That meant that they were in the water. We jumped on the radio, told the race committee and started looking for sailors.

Then Peter Lyons came tearing by us in his RIB trying to catch the Viper. That gave a sense of relief that he wouldn't have left the scene with sailors still in the water. Or would he? Because a minute later, we saw another protector pulling crew off of Alcatraz while Peter acted like a rodeo cowboy trying to lasso a boat that was sailing faster without a crew than we were with a crew. If it wasn't so scary it would have been comical.

We saw the protector charge off with the rescued sailors and then we realized what happened because like countless others in the race before us, we had to crash tack to make Little Alcatraz right then (OK, it was a bit more orderly than a crash tack but I like saying that). 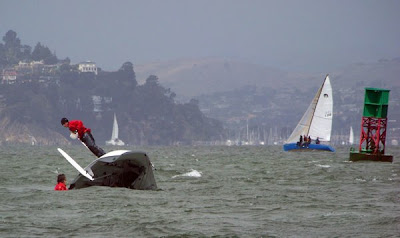 NorCal Sailing has a full account including that picture that I lifted just above from them.

The moment I realized that there were people in the water was one of the scariest moments I've had sailing. Shorthanded and with the conditions like they were, we were actually having a bear of a time controlling the boat. Plus, there were rocks ahead and an island nicknamed The Rock to leeward. I am so thankful for Peter Lyons and the Norcal sailing guys because there wasn't much we could have done. Drew realized that the current would just send them into the island and really kept his head.

whoa! Now that is terror!