My blog went on hiatus and it appeared that I had given up sailing this summer. In truth, I had a deep dark secret I was holding. My boat was broken.

In June, I had to move from A to J dock due to construction. As I was warming up the engine and cleaning up for the journey, I noticed smoke coming out of the transom. That's not normal. A quick scan of the situation and it was apparent that water wasn't being pumped. I couldn't troubleshoot and fix it and I had to move the boat so I took a risk. I motored the 1/4 mile or so with a piping hot engine, smoke pouring out of my transom, and the "engine alarm" screaming. It was nerve-wracking and didn't feel good.

Then summer happened. It was busy and I just didn't have time to sail much less to fix the engine. Poor Lady Bug sat at her new home on J dock neglected. O Docker even commented that my el toro painter was dangling in the water. Sad.

Last week jump-started my lagging sailing career, I raced in the Sarcoma Cup with David, and toured the Bay with Paul. On other boats. Again, kind of sad (except for the great sailing).

When my father in law offered to help, I jumped at it. We were going to fix the water pump come h3ll or high water on Sunday. Let me just say that I had a plan to troubleshoot it and fix it. Then let me say that Bob looked at it and asked me a simple question, "do you have an engine thermometer?" When I said no, he said, "describe that alarm you heard." When he heard that, he said, "could it have been a loose belt (the one that turns the water pump's impeller)?". Of course! Solved and easily fixed. This was going to be FAST!

So we tightened it, ran the engine and nothing was coming out of the back but there sure was a lot of water being thrown around the engine compartment (fyi, that means we fixed the pump issue). Long story short, my little jaunt from A to J dock without the cooling system working had melted the inlet to the water lock muffler (pictured below) and that was a $175 repair. 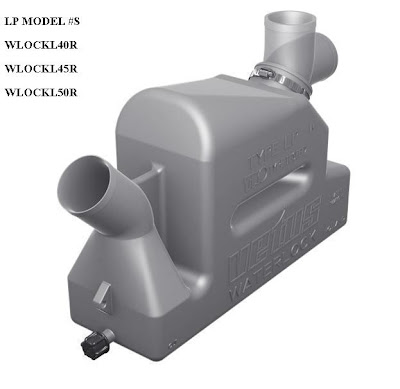 Just another example of problems flowing downstream. But I got off easy since I have a super-smart exceptionally handy father in law who could help figure all this out for me.

And now Lady Bug is ready for action again!

Ah for the fine old days when ye could hoist the crew out in the jollyboat to tow ye out of yon marina and not have to fiddle with that accursed noisy filthy iron monstrosity down below! Aaaarh, matey!

'Tis more the pity that most boats nowadays must have both motor and sails functional to allow for even the simplest outing.

ah, Pat, I haven't shown a map of my new spot in the marina. Unless you really like rocks, you don't want to sail into this "not exactly a slip".