Miscellaneous Sailing News for this Friday

Neither of these two items deserve their own post YET but I have a blog and, darnit, I'm going to use it.

Tonight, Noah and I are doing our first ever onboard camping trip. We're going down to the boat after work, have a nice dinner, turn on the heater, play pirates and bionicles, and sleep at the marina. There's still the possibility he'll back out of it but if not we'll have a good night and further his evolution as a sailor. I did some back of the envelope calculations last night and realized I've spent about a year's worth of my life sleeping on boats with about 3 months of those nights being underway. It's about time Noah gets his first night in.

And, I found a picture of my soon-to-be spinnaker online: 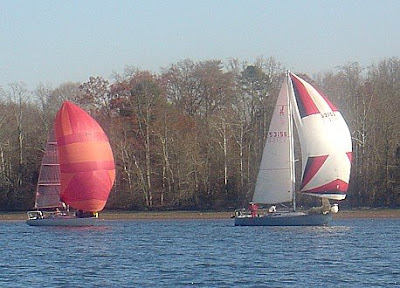 Mine is the red and orange one that is in second place there. Hmmm, maybe I should have looked at J/30 spinnakers instead of Olson 30 ones.