How long have I been talking about spinnakers? A year, two years? I've sailed with spinnakers on other people's boats. I've seen pictures of spinnakers. I've even owned a spinnaker for almost a year. But I have never flown one on my own boat. Or any of my Dad's now that I think about it.

That all changed on Saturday. Phil joined me (and Camille and her friend Phoebe) for a short sail out in the Berkeley Circle. I broke out my "kite" after Phil helped me rig the boat mostly properly. Camille had joined us on the promise of seeing the world's greatest sailor in action and, man, he did not disappoint. Phil got on the boat and I dumped a hodge-podge of blocks, line, shackles and gizmos on deck in front of him. He looked at it, pulled out a piece of chewing gum to hold it all together and rigged the boat. Then we went sailing. 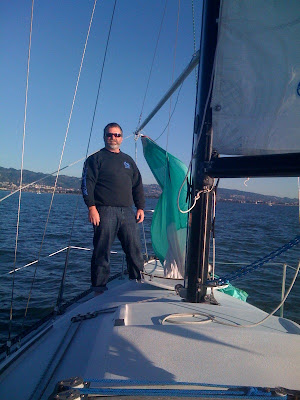 Phil worked the foredeck and I handled the cockpit (includes pit and mast and helm all at once)...he yelled hoist and I hoisted. Phil took a long look at the kite and said, "hmmm, we can use that one as a storm kite." It was a bit small. 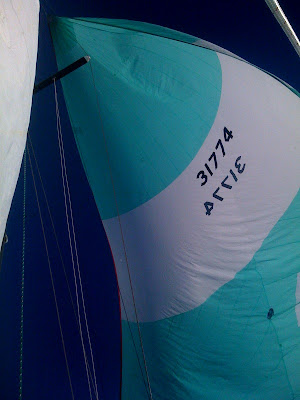 Sidenote: I had packed the kite and Phil didn't even check my work...don't know where he got that level of trust in me but it worked out this time.

The wind had died quite a bit but we got some sailing in, Camille got to drive under spinnaker, and Lady Bug has entered the "Spinnaker Age." Prepare for battle, 3BF! 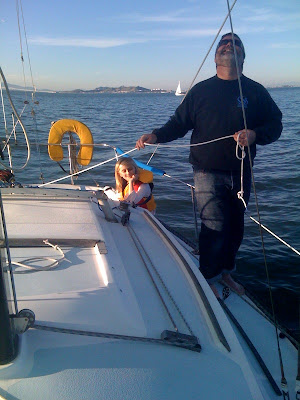