A New Episode of Where the Wind Blows

The wind didn't actually blow on Saturday, it sucked. That's not a lame nautical/meteorological joke, the wind just plain sucked. Or, rather, the lack of wind sucked.

Brian and I hustled over to the start line fully aware of the lack of wind but hopeful that the forecast would hold for the breeze to fill in by Noon. As we approached the Richmond Yacht Club there was a great convergence of sailboats on a glassy sea; nobody was out sailing unless they were "racing" that day, there was just no reason for it. Did I mention that the wind sucked?

We checked in and took our place drifting in a shipping channel waiting for the start; I saw a few people I knew drift by, it was light enough that we had enough time for a 2 to 3 minute chat. The current was pushing us toward the breakwater so I'd scull every once in a while to keep off the "rocks".

About 5 minutes before the start the red and white flag went up, luckily it was accompanied by an announcement on 69 since I had absolutely no idea what that flag meant, I was too busy staring at the guy with the shotgun...this was Richmond after all.

This was also Brian's introduction to Serious Uppity Yacht Racing. Hmmm, sure is a good way to ensure he comes back....hot weather, no wind, and 50 boats drifting around trying to avoid all the Moore 24s being towed out of RYC. Brian is an artsy soul, filled with wonderful surrealist performance art type ideas. Traveling at speeds up to 1/10 of a knot, he thought it would really be funny if we staged a "freak out" (my words not his) at the sight of a jellyfish. Start screaming, "they're coming to get me!!! Aiiieeeee, the jellyfish are coming!!!" then jump in the water, flailing like they're attacking, jump back on the boat yelling "they're in the water too!!!" We amused ourselves for 10 minutes with this line of thought. Then it occurred to me that this might be the first symptom of heatstroke. Did I mention the 90 degree temperature that went along with NO WIND?

The postponements finally ended after 40 minutes. There still wasn't wind but the ebb was lessening I guess. We were drifting on the race committee side of the line and were within 40-50 feet of every single shotgun blast they did. With no wind and a slow heavy boat, we were within painfully close range of the 4 shots per start for all 5 starts...that's right 20 shotgun blasts at close range. We jumped every single time and that's even knowing they were coming. It took us 15 minutes to cross the line from about 20 yards behind it at the 5 minute warning gun-blast. I raised my arms in victory when we finally crossed it; at least we had started. 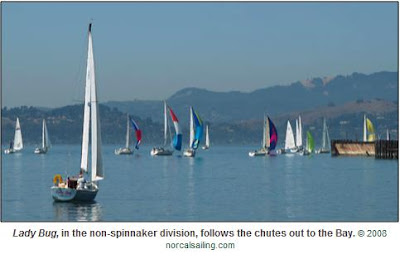 But there were other boats infinitely better sailed and better suited for the conditions. So we were way behind very quickly. There were a few boats in our same situation (too heavy to move in this kind of wind) and we drifted near them. Finally, when we were about to ram another boat into that pier that you see in the picture above, I looked over to Brian and said, "do you want to go to Angel Island?" He said, "sure", and I fired up my 20HP light-air sail and started motoring away.

We got our picture in NorCal Sailing (where there is a great writeup), so it wasn't too bad of a day. The wind finally filled in the slot and we got to sail in 15-20 knots for about an hour while the rest of the fleet had a frustrating day sailing into one wind hole after another (see article above). 27 of 52 boats finished but none would exactly fit Lady Bug's profile (lame ass old cruiser of a boat with dacron sails) so I'm glad we made the decision we did after about 2 hours of drifting maybe 2-300 yards.

All in all, we raced, we sailed and we got to go back to the marina and enjoy a warm beer. An excellent way to spend my son's third birthday!

Congrats. I hate drifting in that area! It seems like there are two winds that blow there, too much and too little. I have to go through here this weekend, heading to Alameda, two times, too and fro.