Back in the Saddle

The first thing I noticed when I got to the dock was that Lady Bug had growth...long strands of goopy growth all around the waterline. Wow, I grew a beard while sailing the Pacific and so did my boat. Oh well, time to scrub. Luckily, I got to the boat an hour before everyone was meeting me so I had time to get Lady Bug shipshape and ready to go, even airing out some blankets that had last seen action on a very foggy July 4th evening.

I think it's pretty obvious that this is the first sailing on my own boat I've seen in almost TWO MONTHS! Wow. But I made up for this sin with one of the greatest sails I've had in years. Nothing too exciting happened on the water but I again accomplished one of my favorite goals, I got a kid totally excited about sailing. I really can't take the credit, I think he was very pre-disposed to be excited but I gave him the opportunity to sail and he loved it. 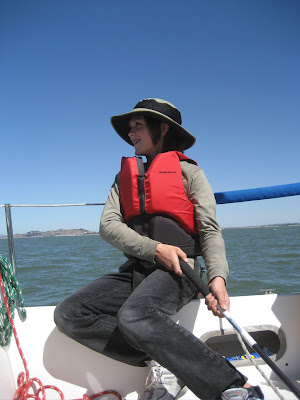 When I get someone with this much enthusiasm for the "sport", I like to make sure he/she gets as much tiller time, winch time, and running around frantically trying to fix things time as possible. And he ate it up. He loved steering, he was genuinely concerned with points of sail, and immediately joined me in a dislike of all things motorized on the water. He apparently repeated to his parents my comment about stinkpotters being illiterate (you know, since they apparently can't read the 5 MPH signs).

When we got back to the dock, he got to cleaning the boat and probably would have dived to unclog the speedo impeller if we weren't rushing off to a late lunch. He's moving up on the crew list immediately.

More happened than my new teenage crew though. My daughter picked up right where we left off months ago. Right out of the marina, I got the sails up and she took the helm, steering an upwind course like the boat was on rails. But then a very important point happened in her evolution as a helmsman. I brought up some popcorn for everyone to snack on and she realized she couldn't steer and eat simultaneously. What to do? Give up the tiller or the popcorn? Neither! 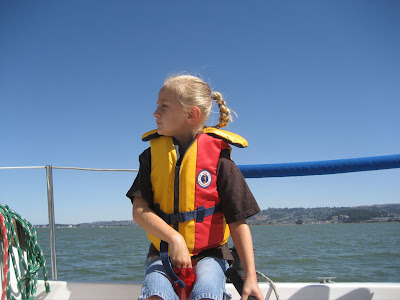 She has now gotten the knack of eating and helming. Next up Miller Lite! I can't believe I just said that but I've been itching to link to that post for some time now.

Overall, a great day to get back to sailing other than the complete lack of wind. 5-10 knots the whole day with some odd windshifts (this isn't a damned lake we shouldn't get wind shifts). A new sailor born, an old salt (7 year old that is) evolves.

It's fantastic to get young people into sailing. Some of my best sailing moments have involved either Gerald or some other young person getting excited about the sport.

There is a bittersweet ending -- kids grow up. Gerald has now embarked on a college career, and I have yet to find a good replacement crew member. I'm proud of him for his accomplishments, but I really miss his work on the foredeck.

Enjoy your daughter's company while you can -- yes, college may seem a long way away when she's just 7. But believe me, it seems just yesterday that Gerald was 3.