We did some Crew Overboard practice on Saturday. It is required by the NOR and it seemed like a fine day to do it. I'll admit that I don't practice often enough but I was surprised to hear pretty much everyone mutter that same thing as we decided to get started. Everyone who reads this is probably a sailor or something similar...don't be like me, practice this stuff! End of Public Service Announcement.

So as we're getting ready to go, Garrett grabs a fender and starts looping a line around it. I then said what could possibly be the worst most unseamanlike thing of all time..."shouldn't we practice with a less expensive fender?" Ah man, did I get crap for my lack of confidence. Yet I know they were thinking the same thing...I'll paraphrase their hidden unspoken thoughts, "I don't want to be responsible for not getting back that fifty buck fender". I guess that's motivation. 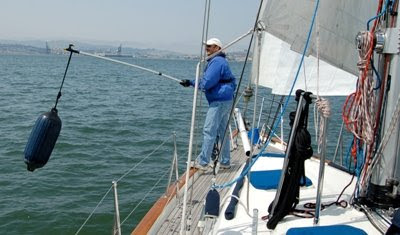 Garrett kept pointing out that the fender looked cold (more motivation) but we got it back on board and nobody had to pony up for a new fifty buck fender.

HAHAHA, I gotta say, though, that's classic. The only thing that would have made it better is if you'd have pointed out a crew member and said, "Or maybe we should practice with Bob here. All in favor?"

In a former life I once did man-overboard drills on a cruising yacht. It struck me that there seemed to be two parts to the problem...

a) getting the yacht back to where the MOB went OB and close enough to pick him up, and

b) actually pulling a helpless, perhaps injured, deadweight, soaking wet, MOB weighing over 200 lbs on to the boat.

I never understood why we practiced (a) so much but never even tried (b) which struck me as probably a much harder problem.

Tillerman, it might have been a while since you last did the drill. There's a device called Lifesling that greatly simplifies b). The unconscious problem isn't solved but the dripping wet 200+ pound deadweight problem is.

Hmmm. I don't think we had one of those back in the day.

I see they offer a 3:1 block-and-tackle for sailboats and 5:1 for powerboats. Is that because sailors are stronger than powerboaters, or because powerboaters are fatter than sailors, or both?

Back in the 70's, I think it was, we tried brent o.'s thing except it wasn't Bob. I think it was Marv. My dad had decided to get into the safety thing, but didn't want to fork over the money for real gear. So, he made his own harnesses and spliced up his own tethers. Real marlinspike stuff. Anyway, they were a bit on the thin side with no padding and when we chucked old Marv overboard at speed, we just about sliced his arms off at the pits.

Which MOB drill do you guys use?

zen, we all decided we are much more comfortable with the figure 8. I know the stuff it and circle is supposed to be faster but you go with what you know.

MOB is a great drill for improving your sailing skills. Mind you, I only do it when teaching students.

Back when Pat and I took our first sailing lessons, we did MOB drills off the shore of California, with a mannequin head mounted on a weighted stick, so at least we had the visual approximation of a person overboard. The sea lions assisted in making the exercise more challenging by slapping the mannequin underwater, so she would disappear from view. But yeah, once we got back to her, hoisting her onboard wasn't exactly hard -- we just grabbed her hair and hauled her up.

A couple of years later, we took additional lessons at the same sailing school, and the instructor we had that time had been involved in testing the early incarnations of the Lifesling. To test it, he went overboard and pretended to be unconscious, and his 9-year-old daughter "rescued" him.