I got a great post response from someone known as O Docker the other day:

Yes, we live the lush life here on the Berkeley Riviera. On race nights, savory zephyrs of grilling sirloin and chanterelles waft down from the yacht club terrace, gently mixing with the jasmine of our manicured gardens. Peacock and pheasant patrol the docks. The washrooms and baths are adorned in Carrara marble.

All is not bliss, though. Last month, I was fined for failing to finish my docklines in Flemish coils.

I found this fascinating. See, Lady Bug is on A dock where we live a pretty hard scrabble life. The docks are dirty and falling apart, we don't have dock boxes, we're right by the fishing boat launch ramp, and my neighbor is a trans-pacer (not an AMC Pacer, a trans-pacer). We do have a really nice bathroom and laundry facilities though, I have to admit that.

I used to race with a guy on O dock, I know how good they have it comparatively. But still, I have a key, I realized I should go check out this oasis in the middle of the Berkeley Marina cesspool. And what did I find? Flemish Coils: 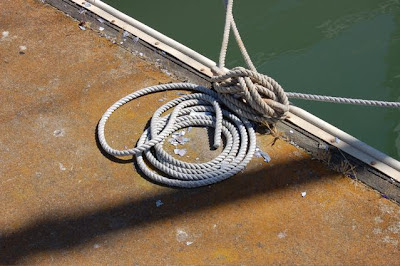 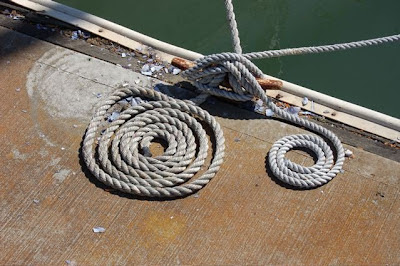 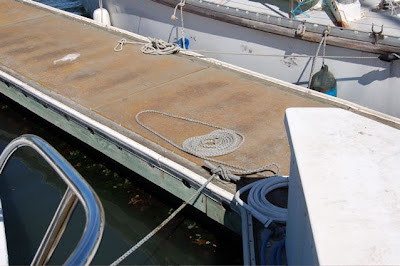 Mind you, these aren't *good* Flemish Coils but this is Berkeley after all. I kept walking and then I saw the pinnacle of Flemish Coils: 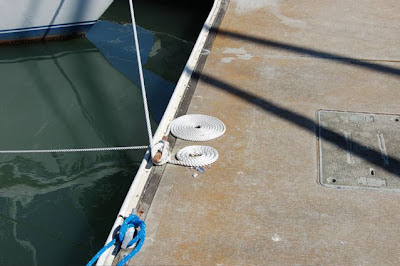 On a Berkeley Yacht Club boat no less: 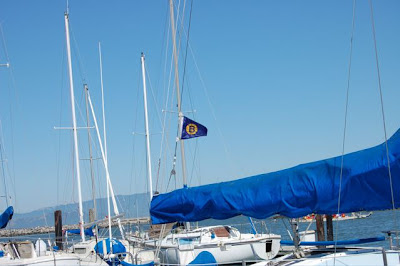 I think I found O-docker. It all makes sense. He's close enough to the yacht club grill to smell it. His lines are coiled nicely. He sees his neighbors trying. And he's a member of BYC so he knows enough about their membership to make fun of the "sirloin".

Sailors and Blog-readers, I present you the highest in Berkeley Marina Accommodations, O Dock: 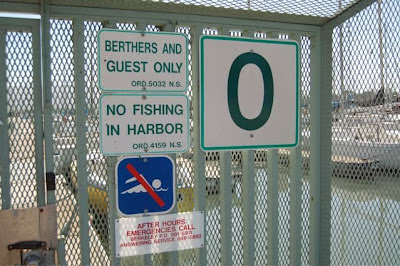 May their lines always be coiled and don't step on the Peacock droppings!

Very poor showing. Some of those cleat hitches are awful. Must try harder.

In truth, I'm not the stereotypical O dock dweller and feel somehow, well, unworthy there. I'm not in the yacht club, and Flemish coils are, as that English fellow once said, nonsense up with which I shall not put. Chapman's does list some good, hard, seamanlike reasons for doing Flemish coils, but I've always found them way too pretentious. They make me chuckle. But, this IS O dock, and, as you've documented, there they are all around me.

As to why the dock that's home to the yacht club has such nice docks, one can only $urmi$e. Another curious thing is that, while your keys give you access to all docks, the sheltered yachtsmen of O dock are given only electronic keys. Maybe they feel we'll be frightened away if we discover the splintery nether reaches of the marina.

O docker, I feel your pain. But, as to the keys, it's worse. I'm FORCED to have both the electronic and standard key if I want to ever use our nice new bathrooms on A dock. I won't complain since the bathrooms are nice but it would be nice to have a single key.

I used to be on J dock, we had the same nice docks there. I miss that.

So, I gather that wasn't your boat? Please tell me it is the Mad Hatter..I love that name. I even took a picture of the transom.

You didn't find my boat, but I think you may have found the essence of O dock. And you may have also found another we/they distinction in sailing. There are the coilers and the non-coilers.

The most noticeable divide I've found on O dock is between those of us who just sail, and the macho racer dudes who make a great show of sailing into and out of their upwind slips. This is usually done with a great barking of orders, fussing with gear, and strutting about.

The guy I most admire here arrives and departs silently under sail. One moment he's here, and then he's not. He's also the most consistent winner in the local series - on what looks to be a very modestly-equipped boat.

The guy I sailed with on O dock would never even put his engine back on the transom after a race. He'd drop sails before turning into his little section of O dock, if he didn't have enough momentum, he'd grab oars and have the junior members of the crew row him in. Always a funny sight.

I think I've seen him do that a few times.

The first time, I thought it was an emergency of some sort, and started down the dock to lend a hand. Then, I saw it was a 'planned' maneuver, sort of.

And, of course, the winds always relent when passing by O Dock.

The guy who leaves and arrives silently sounds like a good sparring partner for someone who's training for a race and needs to learn SF Bay conditions.