Up the Mast Without a Paddle

After threatening to go up my mast for two months, I finally did it. Of course, all of my reschedulings were legitimate (kid things, my Pac Cup ride, nobody to hoist me, confusion over the self-climber). But after a while you have to believe that the pattern isn't just an accident. I'll say it, I was scared.

The hoisting was simple enough, I had a client and an employee hoist me. I walked them through how to raise me with one halyard, then take up the slack on the other. I got up there with little problem. 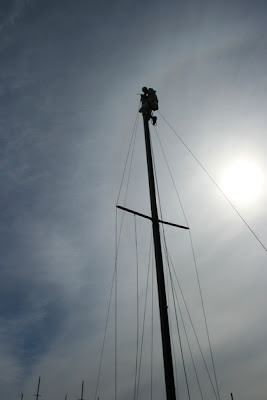 Once I was up there, I realized exactly how high this is. I yelled a few times that nobody was allowed to move or rock the boat in any way. But basically, I just did everything slowly and deliberately. Luckily, the windvane I bought was the same model as the previous so the old mount still worked. The halyard block was easy to install and I only had a slight issue pulling the halyard and new topping lift out of my work-bucket.

By the end, I was just plain done with being up there. Interestingly, in the picture above, the mast looks like a cross. Again, no accident. I am pretty sure I found religion up at the top of that mast. 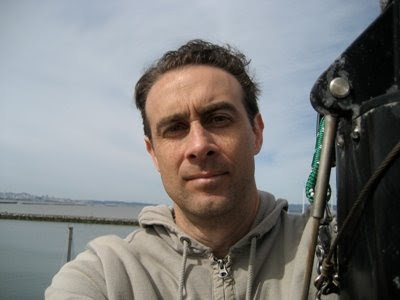 I didn't take a lot of photos from up there as the view is absolutely no different than from the top of the hill about 500 yards away. But I did get a shot of the absolute terror in my eyes with San Francisco as a nice backdrop. 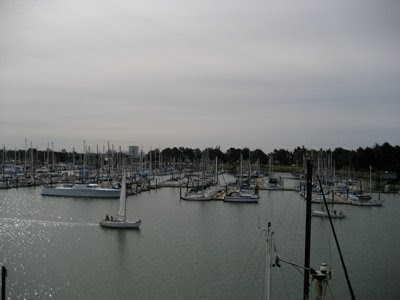 That's the marina from up there. I only put it up because Jarrett asked for a shot like that.

I would do a few things differently next time. I'd go up with the main halyard with the jib halyard as the backup. I'd doublecheck any lines I had to install weren't tangled. I'd probably hire someone to do it for me. I'd pretty up the cockpit for the aerial photo. And I think I'd pick a warmer day. The one thing I wouldn't change is making it back down safely. That part really worked for me.

You have my utmost admiration. I don't think I could ever attempt a feat like that. Probably why I will never own a boat that I can't just tip over on its side if it needs any top-of-the-mast attention.

And how those guys and gals sailing single-handed round the world go up the mast while sailing the Southern Ocean... The very thought gives me the shivers.

now that is some serious customer service.

At least I only have to go _ halfway _ up the mast to fix a topping lift.

I was wondering how Tillerman would climb up a Laser mast -- have some big guys hold the boat steady?