We went out for a wonderful sail on Sunday. At least, I think it was wonderful. The forecast was for light winds but it ended up being slightly higher than that, 15 knots gusting to 20 for the majority of the time we were out there. Of course, this isn't a big deal but the crew and the boat were expecting something less.

As the wind picked up, Alexis had already started lunch for the kids. The wind jumped from under 10 to 15-20 in minutes and of course the boat started heeling. I sent Niles up to the rail to help flatten the boat while we were eating sandwiches; the kids were below having to hold onto their plates while eating.

Finally, Niles and I finished our sandwiches and it was time to reef. We headed into the wind, let the jib rattle around and I dropped the main halyard. As I got up to tighten the reefing points, the freakin' jib car came off the track and started flying everywhere. Not a big deal, just drop the jib and get back to the main. The jib dropped with no problem but as I was gathering it and about to head back to the main, the freakin' topping lift broke. What the?

I looked down into the cabin and Alexis had all the kids putting their lifejackets back on. Apparently, the next thing that would go wrong is we were going to sink! I realized I had to straighten out the sails quickly before they started inflating a life raft.

I made quick work of getting the main reefed, re-raised and had Niles keep us in irons for a few more minutes. I jumped onto the foredeck, untangled the jib sheets, got the car properly fastened, ran back to the cockpit and re-raised the jib. We were sailing again. I looked down below again and all was calm, they were back to eating sandwiches only they were wearing lifejackets now. Alexis had somehow cleared the entire deli that she had constructed in the galley and it was like nothing had happened.

We spent another 60-90 minutes just shooting around Berkeley enjoying the wind with no more mishaps. And when we got back to the dock, everyone looked happy and made noises that they'd go again. Not bad for a light wind day on the Bay. 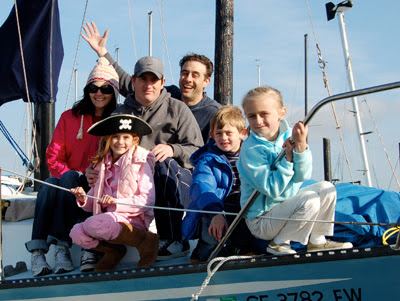 Nice use of the semicolon, dude!

I had a day like of heeling on Sunday, too. We were supposed to have 15-20 and got that, with some gusts.

I had to go back and check my punctuation just in case...just promise me you'll never hold my tense-shifting against me. I think I jump between past and past imperfect just a little too freely.