That's what I expected. I wanted to see the damned thing hit the water and inflate with a loud smoky POW! that would reverberate through the entire poolhouse. The last time I opened a life raft was in 1991 or 1992, my Dad and I knew we had to repack the raft so we took it out on the water, threw it in and watched it inflate. If I remember, we held onto the painter and it inflated as it hit the water. So, I expected something like that but with pyrotechnics.

Sal from Sal's Inflatables threw it in the water : 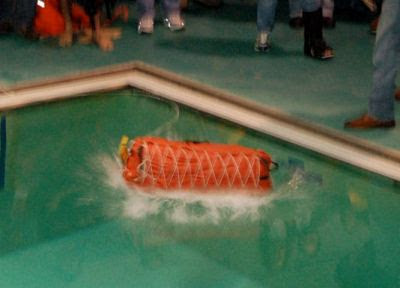 And it sat there, floating: 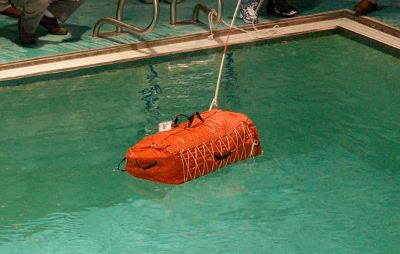 It turns out you then have to pull the painter and watch as it slowly slowly inflates: 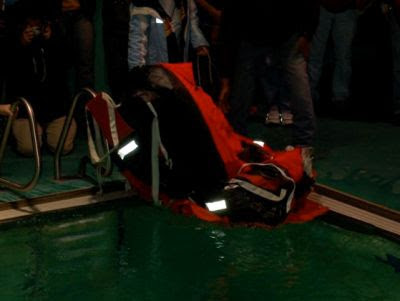 And, finally, after an eternity, you could climb in: 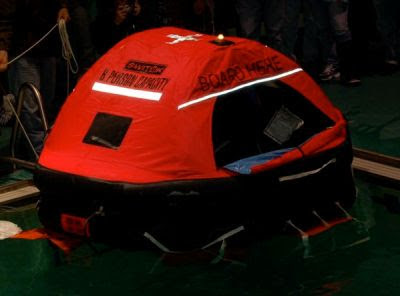 It was all fairly unimpressive if you were hoping for more but at least I have a refesher on what to do 16 years after my last practice. The person truly unimpressed was Nat (all the way on the left) who less than two years ago had to sit in one of these while watching her boat sink from a whale attack. 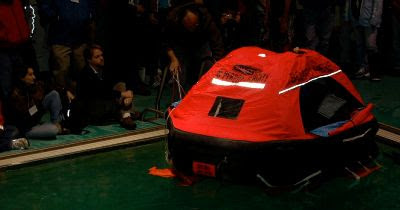 "Been there, done that" would make a good caption.

Hopefully "an eternity" is less than the time it takes for the boat to sink and the sharks to arrive.

I can't find the pictures but in the middle of this inspiring yet annoying thread on sailing anarchy, the owner's son tells the story of the whale hitting the boat. Nat from Elise was on that delivery.